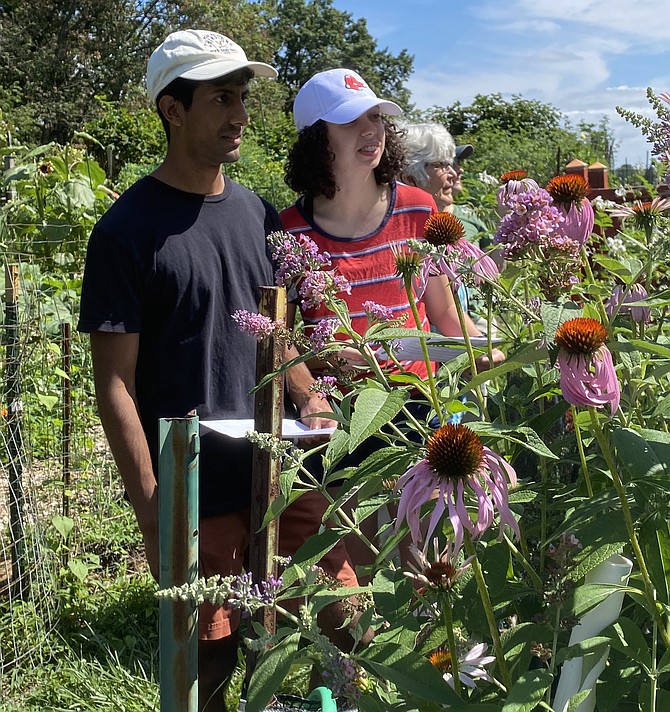 Citizen-science volunteers and counters (from left) Samarth Kishor of Arlington, Summer Chambers of Reston, Ilene McNeal of Reston, and Elise Larsen of Falls Church, gaze over the pollinators hoping to sight a butterfly. Photo by Mercia Hobson. 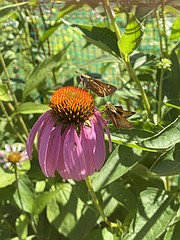 A viceroy butterfly lands near Lake Audubon during the 4th of July North American Butterfly Association Butterfly Count held June 1 through July 31. The Count consists of a compilation of all butterflies observed in one day at sites within a 15-mile diameter of designated Count Circles.

Is it a monarch butterfly or an imitator, a white moth, or a cabbage white butterfly? These possible questions and the interest in being part of something continent-wide may have led eleven citizen-science volunteers and two Reston Association (RA) staff members to participate in the North American Butterfly Association (NABA) 2021 Butterfly Count Program for the United States. Called the 2021 4th of July Count (U.S.), it extends from June 1 through July 31 and consists of a compilation of all butterflies observed in one day at sites within a 15-mile diameter of designated Count Circles. According to NABA, the 4th of July Count (U.S.) is one of the three continent-wide counts in NABA's program started in 1993. Canada and Mexico's counts are on different dates.

Since almost all butterflies are active exclusively during the day, Katie Shaw, RA's Walker Nature Center manager and registered compiler for the Reston Count Center scheduled its Count Day for Saturday morning, July 10. Participants met at Walker Nature Center in Reston. According to NABA, Butterfly Counts require a minimum of four observers and six-party hours.

Shaw provided historical data and information about the Count to the attendees. She said that typically they count between 200-300 butterflies of about 20 species at the Reston Butterfly Count each year. "Last year, we had 22 species seen on our account… and 213 individual butterflies," she said.

"Fifty-five species [of butterflies] are known to occur in Reston... Some are very big, very showy, and colorful like the swallowtails, and some are teeny tiny. Many people mistake them for moths, but they're the type of butterfly called skippers... We can't count moths; this [Count] is exclusively for butterflies. We submit our data to the North American Butterfly Association," said Shaw.

According to Shaw, three of the most abundant butterflies in the Reston Count have been the cabbage white, the eastern tiger swallowtail (the state insect of Virginia), and silver-spotted skipper. Out of all the butterflies RA hoped to see Saturday, the monarch butterfly, Danaus Plexippus Plexippus, the iconic large orange and black pollinator, topped RA's list. It is eligible for the federal endangered and threatened species list. Over the past 20 years, nationwide, the monarch population has declined by 90 percent.

"So, we're at that critical tipping point with that species. Last year we saw four, Shaw said. One of the threats to monarchs is the use of herbicides used by farmers and homeowners. It kills milkweed, the only plant source for monarch larvae.

ANOTHER THREAT, according to the USDA Forest Service, is that an alien plant in North America "is confounding female monarchs during the egg-laying process." Black swallow-wort and pale swallow-wort are members of the milkweed family native to Europe, yet they are a dead-end host. "Swallow-worts may act as a ‘sink' for monarchs; caterpillars from eggs laid on these invasive plants will not survive," stated the USDA Forest Service website.

Shaw said that people need to enjoy all butterflies and do their part to conserve and protect them by planting native plants, their nectar sources, and resisting the urge to spray for mosquitoes. "They don't realize that it is not a targeted pesticide. If you like butterflies and fireflies, don't spray your yard for mosquitoes. Look for standing water sources and eliminate them," Shaw said.

Staff and citizen-science volunteers broke into two groups and counted for three hours until 1 p.m. They divided given locations which proved in other years to be suitable for butterfly populations, such as the garden plots around Hunter Woods because they have great nectar sources, Sunrise Valley wetlands with its diversity of butterflies seen in the grasses, and Hunter Woods School because they have a butterfly garden. Shaw directed participants to all walk in the same direction and together, to not double count butterflies.

THAT EVENING Shaw shared a photo taken by a citizen-science volunteer during the NABA Reston Count. The image showed a Mullerian mimic, the viceroy butterfly, similar in color and pattern but markedly smaller, with an extra black stripe across each hindwing.

Shaw said, "While final results are still being compiled, approximately 443 butterflies of 27 species were counted. This data indicates a strong count year. A lot of times, when the large, showy butterflies like swallowtails are not very plentiful, people perceive that it's a bad year for butterflies…But when you look closer at the smaller species or less colorful ones, you realize that there is more butterfly activity than at first glance.”