Griffith is Honored as Sully District Officer of the Quarter
Votes

Griffith is Honored as Sully District Officer of the Quarter 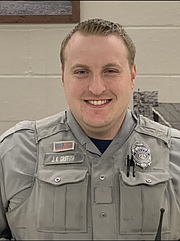 Officer Jared Griffith has been honored as the Sully District Police Station’s Officer of the Quarter for the first quarter of 2021. He was recognized at a recent online meeting of the station’s Citizens Advisory Committee.

Police Sgt. Rick Lehr was the person who nominated him. In his nominating letter, he noted that Griffith graduated from the Fairfax County Criminal Justice Academy in May 2019. Initially assigned to the Reston District Station upon completion of his training, Griffith later transferred to Sully District Station’s Midnight B shift, about a year ago.

“From that time, he has shown each night that he’s a tireless workhorse dedicated to traffic safety and keeping the roadways safe for everyone,” wrote Lehr. “He demonstrates his commitment by constantly finding impaired drivers on the road. Griffith made 34 DUI arrests in 2020 and, by mid-April of this year, he’d made 12 more DUI arrests.”

Lehr said Griffith currently leads the Sully District Station in these arrests and is second in the county. “While he enjoys working in Sully, he hopes to further his passion by becoming a member of our DWI Enforcement Team at our Operations Support Bureau,” wrote Lehr. “Drunk and impaired drivers are a danger to everyone on the roads, and it’s imperative that officers focus on this safety issue.”

In addition to taking drunk drivers off the road, Griffith also focuses on general traffic safety while doing community policing. “His positive attitude, motivation and desire to keep the Sully community safe are to be commended,” wrote Lehr. “And all these elements make him deserving of the Sully Officer of the Quarter award for the first quarter of 2021.”