Return to natural habitat is a multi-year process 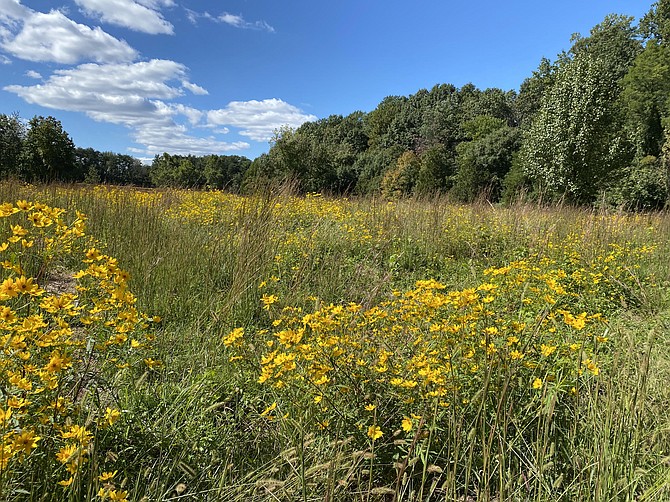 Restoration of healthy meadow ecology, like this one at Franconia Park, Springfield, with abundant native grasses and wildflowers, the expected result after prescribed burns and reseeding. Photo by Susan Laume/The Connection

Before meadow restoration, Laurel Hill Park’s field was overgrown with Blackberry shrubs and other invasive plants and trees. 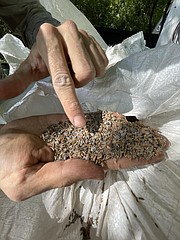 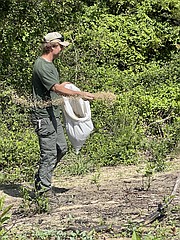 The Natural Resources Branch of Fairfax County Park Authority began reseeding in May as the next step in restoring an area of Lorton’s Laurel Hill Park to a natural meadow. Seeding with a mix of wildflowers and warm season grasses, follows the controlled burn performed in the field area in early April. Both actions are part of a multi-year restoration project that will eliminate many nonnative, invasive plants and return the portion of the park known to locals as the “Dead Cow Field” to a natural native plant meadow to benefit wildlife.

Restoring the meadow will allow “a base of native herbaceous plants and warm season grasses to return,” explained Natural Resources Branch Manager, John Burke. “Invasive trees and plants were prominent here and [they] smothered out other species more suitable to wildlife.” Non-native trees, mostly Callery pear and Autumn olives, along with Blackberry and Rosa multiflora shrubs were taken down earlier by bush-hog mechanization; native tree specimens in the restoration area were marked for saving.

Burke further explained, “Not all native plant seeds germinate in a single year, but are viable in the soil, what is termed the ‘seed bank.’ Fire actually helps to release seeds and stimulates seed germination and plant re-growth. Warm season grasses began sprouting within two weeks of the April prescribed fire. Soil nutrient levels and organic matter increase after a fire. The fire’s heat has been found to make some nutrients more readily available; a benefit to plants. Taken together these changes provide better growing conditions for plants, also ultimately benefiting animals, birds, and insects.”

Although hearing of fire in nature areas might bring to mind destructive wildfires, such as those in the news in the West, prescribed fires are actually a way of imitating nature’s way of encouraging growth. Nature typically provides a cycle of growth and periodic fires, ignited by lightning, that has gone on for ages. Fires clear dead leaves and trees, and competing invasive plants, so new plant growth can occur and give native plants an opportunity to get a foothold.

According to historians, when Europeans arrived here, native peoples, such as the Powhatans, living in areas now part of Virginia, were using fire to clear underbrush and create grassland habitat to support crops and game birds as food sources. As human development took over more area, fires were suppressed, allowing invasive non-native plants to out-compete native plants. Scientific study tells us that this has resulted in a reduction of diversity… a condition recognized as detrimental to the environment and our planet, and even, ultimately, to human survival. The on-going Natural Resources Branch project will ultimately provide a better home to native birds, animals, and insects.