Juneteenth: Celebration and Service in Scotland of Potomac
Votes

Juneteenth: Celebration and Service in Scotland of Potomac 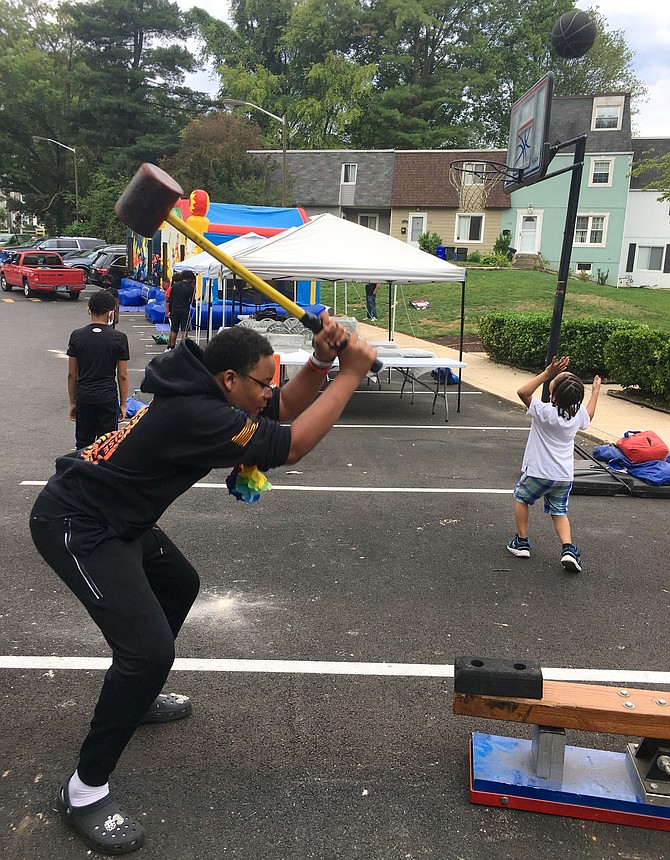 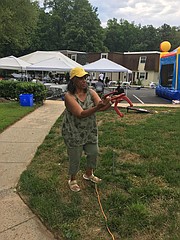 Rebecca Dove, a long-time resident of the Scotland community, lined up her throw playing horseshoes at the Scotland Juneteenth celebration Saturday, June 19. 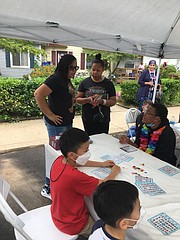 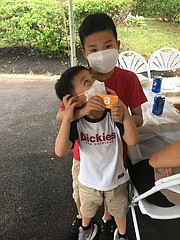 Jeeyuel Soh, 8, shows off the gift card he won playing Bingo at the Scotland Juneteenth celebration Saturday. His brother, Jeeha, 4, celebrates with him.

The Potomac community of Scotland joined others across the county and the nation to celebrate Juneteenth on Saturday, June 19.

“Juneteenth is a day of celebration, the end of slavery. Juneteenth is a day we recognize our ancestors and all that they fought for,” said LaTisha Gasaway, one of the Scotland Home Owner Association leaders, which sponsored Saturday’s festival.

The afternoon event was a multigenerational gathering with games, sports, music and food — all the makings of a summer picnic with a purpose.

The day has a long history within the African American community.

According to the website of the National Museum of African American History, “On June 19, 1865, Union General Gordon Granger arrived in Galveston, Texas. He informed the enslaved African Americans of their freedom and that the Civil War had ended. This momentous occasion has been celebrated as Juneteenth — a combination of June and 19 — for over 150 years.”

The day was recognized as a federal holiday just this year. On June 17, President Joe Biden signed the Juneteenth National Independence Day Act into law.

Besides celebrating freedom from slavery, Juneteenth at Scotland this year had a number of other purposes.

It was the community’s first Juneteenth celebration.

Chuck Williams, a member of Scotland AME Zion Church on Seven Locks Road, wanted to offer COVID-19 testing and vaccinations. He was able to bring that to the festival with the help of the Montgomery County African American Health Program and the National Center for Children and Families.

The health program set up in the Scotland Community Center and, a little more than halfway through the afternoon had administered four vaccinations and six COVID-19 tests.

Williams was also on hand to help with voter registration.

The cul-de-sac at the end of Scotland Drive was dedicated for fun with two moon bounces, a basketball hoop, a high striker for testing strength, horseshoes and corn hole.

Neighborhood kids were the first to get involved, shooting baskets and doing tricks in the moon bounces.

Deejay 100 from Clark Entertainment provided music throughout the afternoon and there were shade tents set up for people to sit out of the sun and visit or eat the wonderful lunch provided by members of the Homeowners Association.

“This [afternoon] is also a fundraiser,” Gasaway said. “From now until Black History Month in February, we plan to raise money, then ask the County to help.”

Funds raised are for refurbishing Scotland’s original 25 homes, those that are owned by mostly longtime residents of the community. Scotland also has 75 rental units. All 100 homes were built in the 1970s, Gasaway said.

“Our focus is to preserve our history, to preserve the look of the original homes. Seventy-five percent of the 25 homes are owned by senior citizens and they don’t have the means to take on the repairs.”

As the kids played Bingo for gift cards, the King of Scotland Contest began with 10 contestants. The winner, Lorenzo Wilson, won out over the others in what was a basketball shootout. Wilson outlasted the others by getting the most baskets in each round.