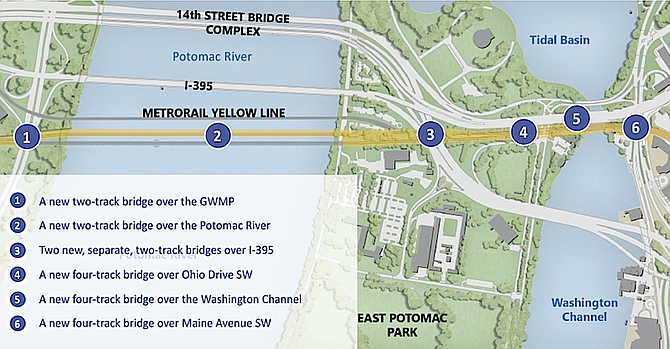 The South County Federation, a coalition of area homeowners associations and individual residents, sponsored a virtual May 11 presentation on the status of area rail transportation projects, including those in Franconia/Springfield/Occoquan. Organized by member Peter Weyland, the information session included presentations from the Department of Rail and Public Transportation (DRPT), Virginia Railway Express (VRE), and Virginia Department of Transportation (VDOT).

On March 30, Governor Northam and U.S. Secretary of Transportation, Pete Buttigieg, announced a definitive agreement to fund the $3.7 billion project in agreements with Amtrak, CSX, and VRE, for expansion of infrastructure and use of the existing CSX right-of-ways. The agreements support building a $1.9 billion dollar bridge over the Potomac River dedicated to passenger rail and improvements to L’Enfant Station. The monumentally complex project, on the scale of the Springfield Mixing Bowl, has a projected completion in 2030.

Phase one, with completion in 2025, will add a third track between Franconia/Springfield and Lorton VRE Stations and replace the Newington Bridge over Newington Road and Route 1 (near Fair Winds Brewery), with construction beginning in 2023, at a cost of $208 million dollars. The second phase adds a third track between Woodbridge and Rippon.

The Franconia Bypass project, starting just south of Franconia/Springfield Station, allows passenger trains to cross over to serve VRE stations. This $298 million dollar segment will begin construction in 2023 with planned completion in 2026.

Improvements to the Franconia/Springfield VRE station, outlined by VRE Chief Engineer, Dallas Richards, will extend the east and west platform with construction beginning on June 2; for completion Sept. 2, 2023. The changes will allow the network to add five trains on the line.

Old Colchester Bridge, a steel bridge, previously repaired with reinforcing timbers, victim to corrosive effects of water/air/salt, is beyond further repair and will be replaced; first by a temporary bridge to open the roadway, then by a permanent replacement when funded.

VDOT manager Gary Runco updated the status of work on the Old Colchester Road Bridge, which was closed on March 19 due to safety concerns. An 80 by 24-foot temporary bridge over Pohick Creek will be put in place to allow the road reopening. Foundation work for a temporary bridge due to begin was placed on a short postponement due to the recent gas shortage and pipeline restart. The temporary bridge placement will be completed in two to three months. Delegate Kathy Tran and State Senator Scott Surovell are working to assure that the permanent project receives priority on the federal infrastructure list for the bridge, which is on the National Bridge inventory.