Normandy D. Piccolo is author of ‘Why is Kristyn A. Kutter?’ 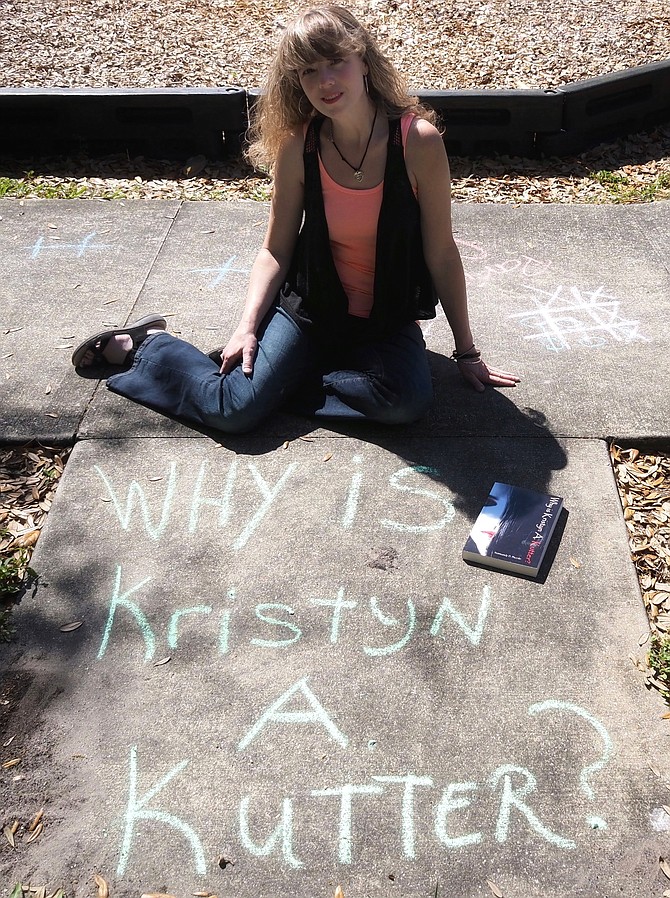 “Why is Kristyn A. Kutter?” by Normandy D. Piccolo, an alumna of James Madison High School, made the 2021 In the Margins Book Award TOP 10 List for Fiction/Non-Fiction and the Fiction Recommended List for 2021. Photo contributed

Normandy D. Piccolo, James Madison High alumna, published writer, book reviewer, advertising copywriter, and freelance journalist, is the author of a book selected for the 2021 In the Margins Book Award: School Library Journal Top 10 Fiction/Non-Fiction and the Fiction Recommendation List for 2021. In an interview with The Connection, asked if the book was a reflection of her life, Piccolo said, "Briefly, yes…but for me, personally, it just hurt." Piccolo authored the award-winning book, “Why is Kristyn A. Kutter?”

Originally published June 2019 and recommended for ages 16+, the 318-page book begins with a trigger warning. It discusses serious and difficult issues regarding self-harm, depression, and suicide. "Some people who are self-harmers can sometimes get triggered by reading other stories about self-harm. It's a negative coping mechanism," Piccolo said.

As the author, Piccolo said, she felt due diligence to warn readers that if they were sensitive to the topic and didn't feel they could handle reading it, then the book was not for them. "You're not ready for it yet," she said.

THE BOOK also arms the reader with resources for crisis intervention through national centers and online support. In the text, the author notes that self-harmers are not weak people who can't deal with life. They need guidance, reassurance, and support as they learn how to manage better. "There is no shame in reaching out for help, nor is there shame for being a self-harmer," writes the author.

“Why is Kristyn A. Kutter?” delves quickly into bullying, shame, and how social media, while a good thing most of the time, is "really a bad thing because it can get ugly." Piccolo said she is thankful she went to Madison and became a Warhawk because as hard as it was going through high school and being bullied, going through self-hate, self-harm, and negatives, it helps her now to reach out and help others.

Piccolo's book is real, truthful, and deals with self-harm, depression, and suicide told in a manner where the author does not inject her personal story. The reader can put themselves in a position that is relatable without interference. Piccolo achieves this by writing the content in a Q & A dialogue format and italics telling the actions and thoughts, similar to a theatre script with stage directions.

Piccolo said the way she writes is that she sees a movie screen in front of her, actions happening with the characters, and hears what they say. For her character Kristyn, it downloaded instantly for Piccolo – a girl sitting in a red chair going on a self-discovery journey, having a conversation with herself. "At some point we all find ourselves having conversations with ourselves, whether people will admit it or not, and whether you have it in your head, or have it out loud, sooner or later, as issues start to mount in your life, there's just no getting around it." Piccolo's character Kristyn records the conversations with herself.

"Kristyn takes a sip of soda.

A. "Cutting was something Maddison, and I did in private. We never really talked 'bout it."

Q. "What happened that pushed you to self-harm for the first time?"

Q. "Was it your break-up with Jamey?"

Kristyn's palms begin to sweat. She wipes them on her jeans to hide her nervousness.

According to Piccolo, she wanted Kristyn to be real in a way that a teenager or an adult who was a cutter still dealing with hurt could put themselves in that red chair and relate to Kristyn but at the same time relate to their personal issues, things going on with them and their hurts.

Piccolo acknowledged she has no method to her writing; she never does outlines. She sits down and bangs it out, rarely going back, maybe an edit or two tweaking a word here and there. Sometimes she uses an old typewriter. Other times, she sits outside up against a tree and writes the words in a notebook.

PICCOLO said a lot of people had given her controversy because of the negative topic. People will not interview her about self-harm or talk about it because it is a negative topic.

As a freshman at James Madison High School, Piccolo said she spent a lot of time huddled in a library's back corner. She would stare up at all the books around her and say to herself, "One day, I'm going to write something that's going to help somebody not feel the way I feel right now. It took me a long time to get to that point…through my early twenties. It was really rough, very rough…If I had read something like Kristyn, maybe know things, I wouldn't have looked at those years so negatively."

A. "Sometimes I get a rush from cutting, and it's the best feeling in the world when it happens. But…"

A. "Coming down can feel even worse."

"My hope is that people, no matter what age, will be able to look in the mirror and see themselves the way God sees them. Beautiful. Unique. Strong. Stop seeing themselves the way the bullies may have convinced them to believe they are. In today's world of cancel culture, I believe it is time to cancel 'negativity' and bring back a 'positive outlook' in one's onward movement through life," Piccolo says.

“Why is Kristyn A. Kutter?” is available on Amazon in paperback and on Kindle.