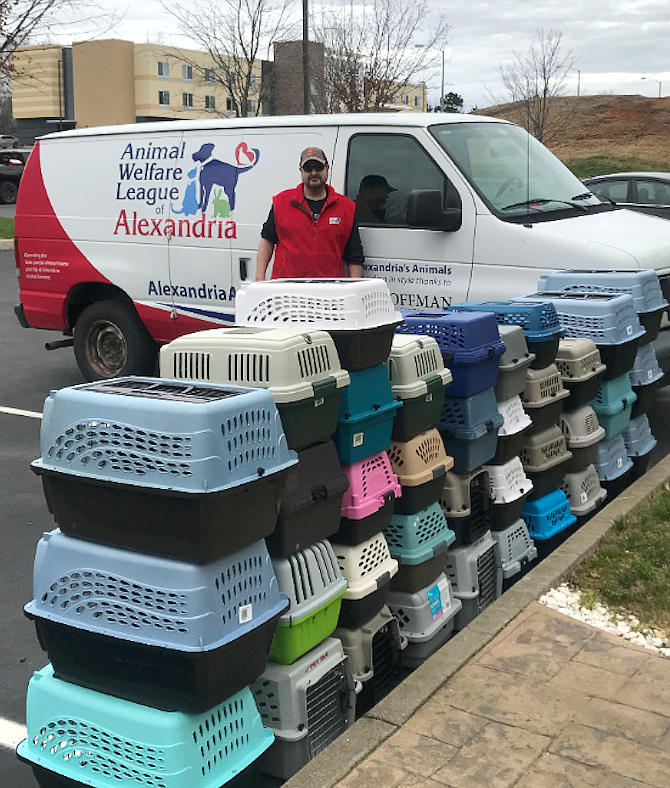 On Saturday, March 13, the Animal Welfare League of Alexandria (AWLA) brought in 50 cats from eight individual animal shelters in Texas.

On Saturday, March 13, the Animal Welfare League of Alexandria (AWLA) brought in 50 cats from eight individual animal shelters in Texas, still recovering from the devastating February snowstorms and subsequent power outages. Many of these Texas facilities are now experiencing a surge of surrendered pets, and by transporting animals who were already in these shelters to Virginia, these organizations can better address the continued need for care and assist even more homeless animals.

“We received a request from the Human Animal Support Services (HASS) national network asking if shelters were able to take in homeless animals, to make room for Texas shelters to care for the influx of animals they were seeing,” said AWLA Executive Director Stella Hanly. “We knew the plans were still coming together, but we also knew we had to help.”

The biggest hurdle was making sure a vehicle could safely transport that many cats. While the AWLA owns several vehicles for day-to-day shelter use, none is equipped with fixed cages for that many animals. Luckily, one AWLA volunteer, a retired naval engineer, had the solution, and in a matter of days, he created a removable rig that could be placed in one of the AWLA’s vans that could accommodate travel crates for up to 50 cats. Two additional AWLA volunteers offered up their time to make the 14-hour round trip drive to Tennessee, where they would meet with a HASS representative to pick up the traveling cats.

“This mission was quite the venture from the start,” said Katie DeMent, AWLA’s Director of Operations and liaison for this effort. “In less than two weeks, we’d connected with Texas shelter liaison, worked with other local shelters and rescues to determine who could take in cats, found volunteers ready to take on this long-haul drive and outfitted our van so we’ll also be able to use it to help even more animals in the future. We asked a lot of our team, but they all worked together so that we’ll be able to help these Texas facilities and all of these homeless cats.”

In addition to facilitating the transport, the AWLA served as a local hub to connect many of the cats with shelters and rescues in the region. Twenty of the cats, ranging from 6 months to 5 years old, stayed at the AWLA, where they will undergo general and veterinary evaluation before being made available for adoption. The remaining 30 cats have gone to other local shelters and rescues, including the Animal Welfare League of Arlington, Loudoun County Animal Services, Four Paws Rescue and Helping Homeless Felines.

To see the cats brought to the AWLA and learn how to meet them, either virtually or in-person, visit https://alexandriaanimals.org/animals-for-adoption/.

After the return trip of more than seven hours, transport volunteer Kerin Ord said, “Seeing cats in their condos at the AWLA, kittens playing with toys, many cats just reaching out for pats and attention … They seemed to realize that all was good from here on, and with the resilience of animals, had quickly gotten over their long journey.”

Along with transporting these 50 cats on March 13, the AWLA also took in 40 dogs of varying ages and breeds, working with True & Faithful Rescue Mission to assist under-resourced shelters in Florida and Texas. Like the 20 cats, these dogs will also be made available for adoption once they undergo medical and behavioral assessments.