‘Long May It Turn’ in Great Falls
Votes

‘Long May It Turn’ in Great Falls 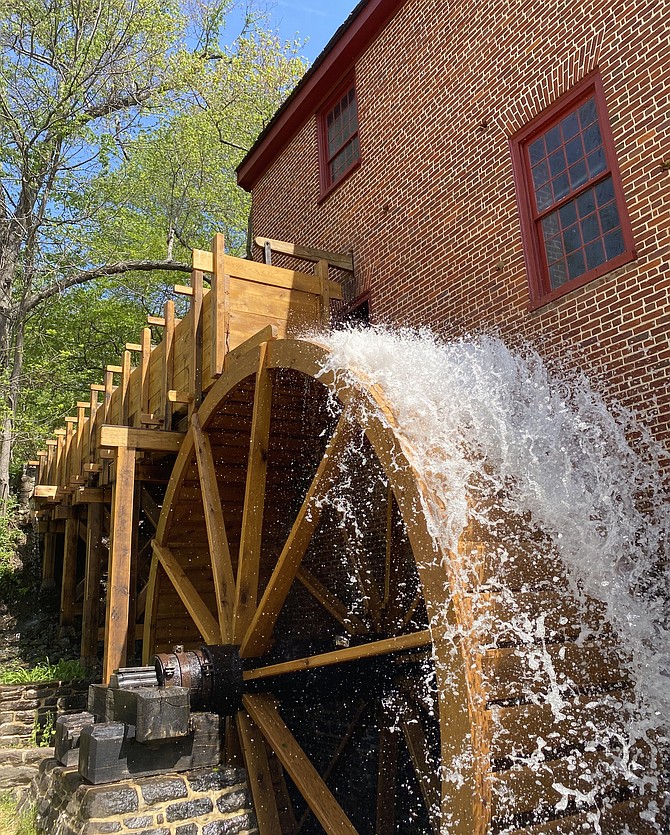 With its new flume and waterwheel, Colvin Run Mill in Great Falls reopened on May 2, 2021. Once again, the mill can grind grain and produce cornmeal as it did 200 years ago. Photo by Mercia Hobson.

Water from Colvin Run flows to the flume, over the waterwheel to the tail race, making its way to Difficult Run. 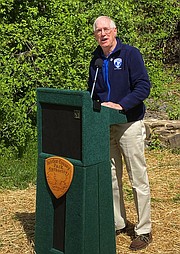 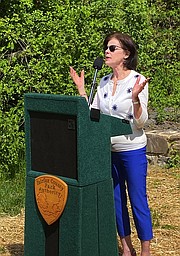 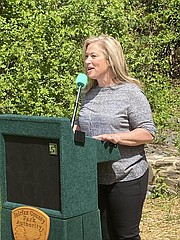 Colvin Run Mill opened in a grand celebration for its first grind of the season on Sunday, May 2, 2021. The occasion marked the completion of the replacement white oak flume and water wheel that power grinding operations at Colvin Run Mill.

According to the Fairfax County Park Authority website, voter-approved Park Bonds financed the $382,000 project. The Park Authority's board of directors approved the project on May 27, 2020, and notwithstanding COVID-19 and Route 7 renovations, work began the second quarter of 2020. Staff estimated that the new wheel and flume would cut annual maintenance costs by $6,000 per year.

"We would be remiss if we did not recognize today's reopening of the flume as yet another step in the progression of historic restoration and preservation. It is our mission and our duty, but it is also our privilege," said moderator Tim Hackman, the Dranesville District member of the Fairfax County Park Authority Board.

Hackman welcomed speakers Jane Edmondson, representing Dranesville District Supervisor John Foust, Sara Baldwin, Acting Director of the Park Authority, and Dan Dyke, President of the Friends of Colvin Run Mill. On hand was a special guest, Kelly Hummer, a relative of the millers who owned and operated Colvin Run Mill from 1883 to 1934.

LOOKING BACK to when Colvin Run Mill first opened to the public in 1972, Hackman said at that time: it was the culmination of over "four years of exhaustive preservation and restoration efforts." While that seemed like an ending, the 1972 opening marked the beginning of preservation and interpretation.

According to Edmondson, this project had to happen to keep the site relevant. She recognized millwright Ben Hassett of B.E. Hassett-Millwrights Inc. of Louisville, Ky., hired to build and install the new flume and wheel. The value of the Friends of Colvin Run Mill did not go unnoticed by Edmondson.

"They have a legacy of giving more than we can ask, providing support that tax dollars simply cannot do on their own… On behalf of Supervisor John Foust, I congratulate all of you who are involved in this project and wish you many happy milling days in the future," Edmondson said.

Sarah Baldwin, Acting Director of the Park Authority, said that although last year was challenging, today reminded them all there would be many great days ahead. She noted that the project team recognized that they had to maintain the "valuable county resource despite the pandemic." She said that the plan called for sourcing and purchasing the wood needed to fabricate the new parts, fabricate the wheel and flume, remove the deteriorated parts, and then finally install. They did this despite the Route 7 road project, no water, and COVID. "This project was delivered on time and on budget… It's a feel-good story that I'm very happy to be part of," Baldwin said.

DAN DYKE said he thought about the lifespan of one wheel. The mill was built in 1810 and stopped its commercial operation 124 years later, in 1934. "This wheel was replaced six or seven times. And each time it was replaced, it was because of financial necessity…The farmers that lived around here depended on this mill; needed this mill." He said the mill was ignored from the 1930s until Fairfax County acquired in the 1960s. "This is it's third wheel… It's not an inexpensive project. In fact, it's outrageously expensive," he said.

Dyke expressed gratitude to Fairfax County Park Authority for having the foresight to make the investment in history. "For understanding that the public recognizes touchstones to our past, like this mill," he said. "Knowing how much the visitors to this site appreciate it. Knowing how much the volunteers who donate their hours to support this mill, love this mill, I have the confidence that this will not be the last wheel."

All grain products at Colvin Run Mill are $7.97.