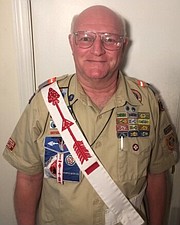 Stephen Arthur Richardson died peacefully at home on May 8, 2021. He was born Aug. 5, 1954 in Nashua, NH to Rita and Harold Richardson who both predeceased him. He was raised in Milford, NH and graduated from Milford Area Senior High School in 1972. Steve enlisted in the Navy and served 4 years on Active Duty, then many more years as a reservist, finally retiring as a Master Chief in 2002. He lived and worked in Springfield for many years, and was actively involved in supporting many organizations in the community – Cub Scouts pack 1140, Fairfax County Fire and Rescue as a canteen driver volunteer, ECHO, Fairfax County CERT, and his local homeowner's association. Steve was an active member of St Paul’s Episcopal Church. Steve’s marriage to the former Mary Alexander ended in divorce. He is survived by his loving sons, William (Julie) and Samuel, granddaughter Aleigh, sister Janice (Gary) Boutillier, brother Tim (Barb), and several cherished nieces and nephews. In Lieu of flowers, the family would like donations to ECHO in Springfield or the St Paul’s Memorial Fund.