The award recognizes service contributions to the development of the Great Falls community. 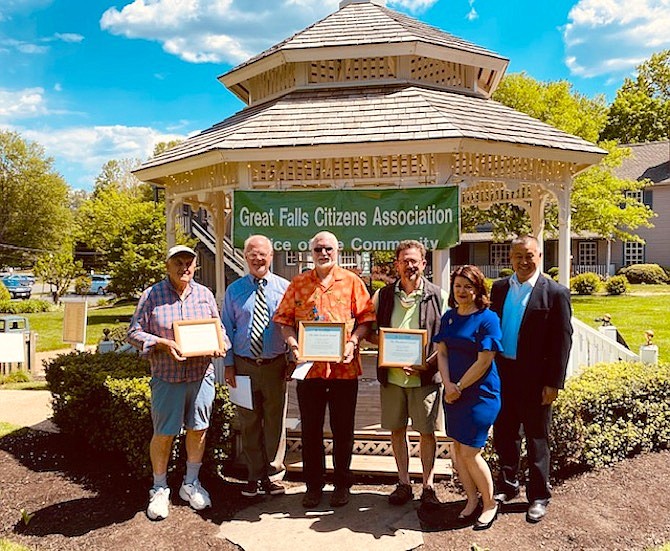 The Executive Board of the Great Falls Citizens Association (GFCA) recognized Eric Knudsen on Saturday, May 15, as the recipient of its 2021 Glen Sjoblom Award for his “long-time, extensive and meritorious service to the community of Great Falls.” Local, regional, and state leaders attended the special program held at the Great Falls Village Centre Green. GFCA honored Knudsen, who tirelessly devoted himself for several decades to enhancing Great Falls through his work on local transportation, land use, and environmental matters.

GFCA established the Glen Sjoblom Award to recognize its members who excel in serving their community. It is the organization’s only award for outstanding service. Current GFCA President Bill Canis said that without this kind of civic involvement and activism, the community Great Falls citizens and others know today would have withered away.

“We are gathered to celebrate the people who are dedicated to that philosophy,” said Canis. Eric Knudsen is one of those people.

Glen Sjoblom is the 2019 Award recipient. He put the award in the context of the long commitment of GFCA’s pioneering board members, those who served the community since the organization’s founding in 1968.

According to the honoring resolution, Knudsen served on the GFCA board with a distinguished record for more than 15 years, including three years as president, three years as vice-president, and additional terms as chair of the Transportation and Land Use & Zoning Committee.

AS PRESIDENT, Knudsen improved the efficiency and management of GFCA board proceedings, collaborating with past presidents to create GFCA’s first Policy & Procedures Manual that guides the organization. His prioritization of on-site visits to personally evaluate land use and transportation issues provided accurate perspectives and insights. The documented visits became a hallmark of GFCA’s work, validating issues the organization brings forward to the staff at Fairfax County and Commonwealth and developers.

Knudsen launched ongoing investigative and mitigation efforts in the community to control stormwater runoff. He participated in a GFCA committee tasked with overseeing the cleanup of chemical spills in the center of Great Falls that threatened residents’ well water. It culminated in a program managed by the Virginia Department of Environmental Quality.

Leading land use negotiations with the County and developers led to the rezoning of Brooks Farm and plans for a SunTrust Bank. According to the resolution, Knudsen became a “driving force for the establishment of the Great Falls Grange Foundation, serving as the GFCA representative in establishing that organization to preserve one of our community’s most important historical assets.”

Knudsen also co-chaired the Transportation Committee. In collaboration with co-chair Joan Barnes, they worked to have the Virginia Department of Transportation (VDOT) revise its proposed plans for the intersection of Route 7 and Georgetown Pike, reducing congestion and ensuring greater safety. Knudsen initiated and managed negotiations with engineers and county staff to narrow Walker Road, facilitating pedestrian crossings in the commercial center.

Knudsen’s interest in citizen input in the widening project of Route 7 between Reston Avenue and Tysons led to the Route 7 Working Group. This eight-year commitment advised VDOT and included participation by the McLean and Reston citizens associations.

SPEAKERS at the May 15 award presentation praised Knudsen for his record of service. Virginia State Senator Barbara Favola (D-31) commended Knudsen for giving residents a voice by reaching out to them for verified consensus. She called these characteristics the hallmark of strong nonprofit organizations.

GFCA Board member Gary Pan worked with Knudsen to establish the Great Falls Grange Foundation. He commended him for helping to breathe new life into the historic building and providing a new level of community involvement.

“I have worked closely with Eric Knudsen on numerous transportation and land use projects over the years,” said Fairfax County Supervisor John Foust (D-Dranesville). “His leadership has improved life for residents of the Great Falls community. In 2011, I selected him to represent Dranesville as Lord Fairfax. He is a worthy recipient of the Glen Sjoblom Award for community service,” Foust said.