Road Paving is Underway in Arlington 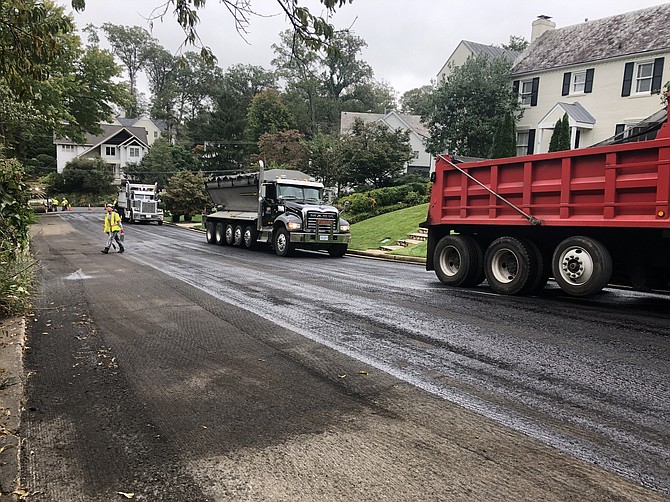 The scraped road gets ready for asphalt. Photo by Eden Brown.

Lately, it seems every road in Arlington is being scraped and repaved.

Not so, said Dave Hundelt, Chief Support Engineers, Water, Sewer, and Streets Bureau, Arlington County. We fell behind a little bit last year, when due to the pandemic we weren’t able to do as much, but we are on track to do 72-lane-miles of resurfacing this year, pretty much our normal goal per year. (A lane mile is one lane of paving: some roads have as many as three lanes worth of square footage.)  So a short residential street can have 3 lanes, if it’s wide. Streets can only be resurfaced when the weather is warm, so everything will be wrapped up before November.

Hundelt said it might seem like streets get repaved more often, but the average residential street is only done (roughly) every 20-to-30 years. If the street is a busy one or has had a lot of construction on it, then that will happen so 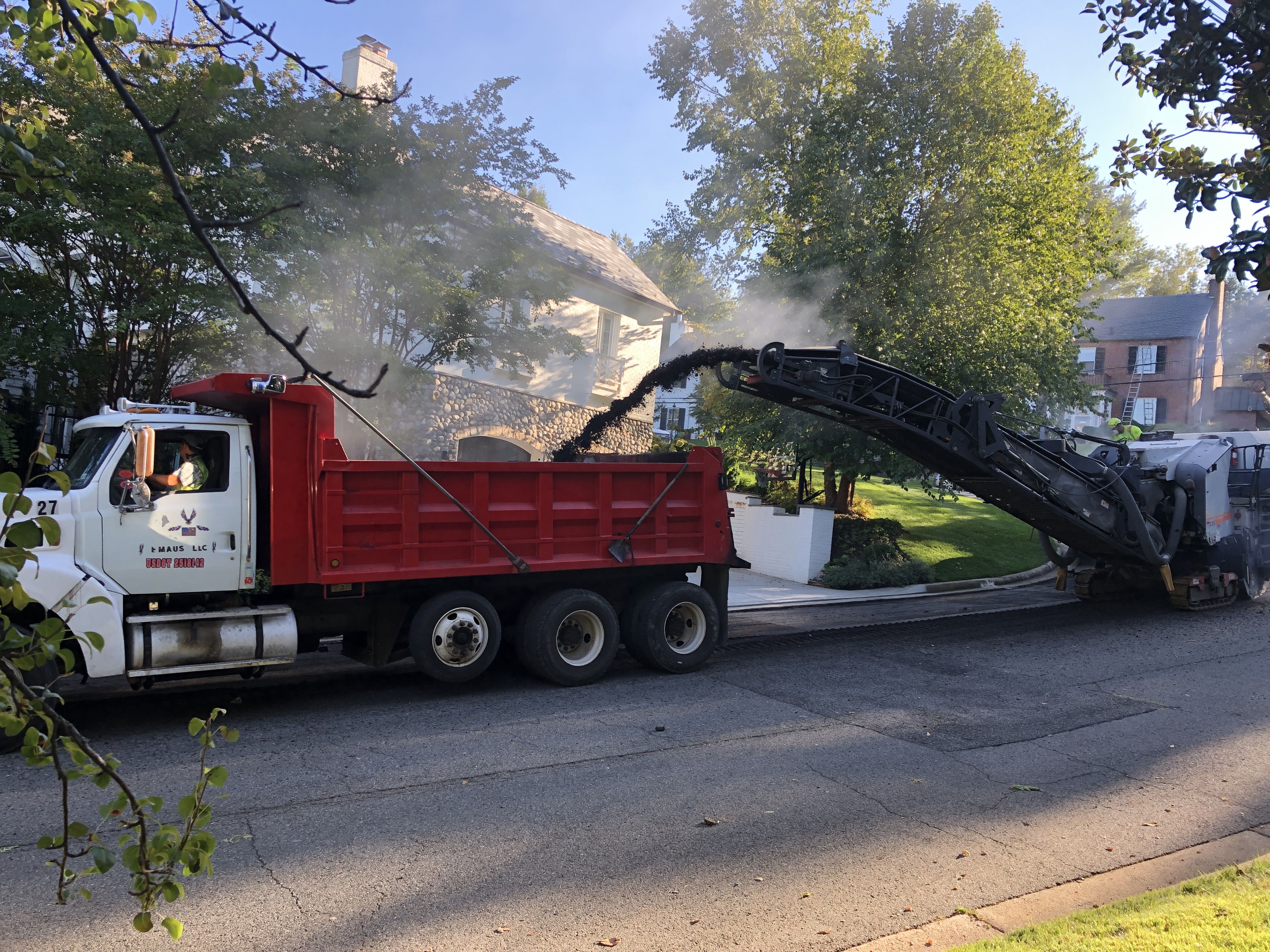 An Arlington street is scraped down as old asphalt is conveyed to trucks and sent for turning into RAP.oner. Hundelt says Arlington tries to review one third of its streets every year, or put another way, streets get reviewed roughly every three years to check on the condition and obtain a score on the index that will tell Arlington whether the street needs work. The county will probably increase the frequency of that review given the needs they are seeing.

“You want to do a road over before it is in really bad condition,” Hundelt said. “So it’s easier to repair a road that has an index of 40 than a worse score.” Some roads, like Wilson Boulevard get 20,000 to 30,000 vehicles driven on them every day, and therefore need repair more often.

The county also uses another pavement solution to try to keep the resurfacing down, the slurry seal. The county does about half as many slurry seal surfaces because that seal will last another 8-10 years, reducing the frequency of the major work.

And what happens to the truckloads of asphalt scraped off the road and spewed into trucks, sometimes as many as five trucks full for a short road? Most of it gets recycled.  It is either processed down into small pieces and reused for a granular base, subbase, stabilized aggregate, embankment, or fill material. Or more frequently, the milled asphalt becomes reclaimed asphalt pavement (RAP) in a new asphalt mix. They process the old asphalt into smaller pieces and thus save on aggregate and binder, which is the most expensive material used in the paving mix.

Hundelt said Arlington residents are generally very cooperative about the parking restrictions that come into play during repaving.  Sometimes residents, especially those who have lived in developing countries, ask why the streets are being paved when they don’t seem to need it. Others want to know why their street isn’t being paved when their neighbors’ street is. 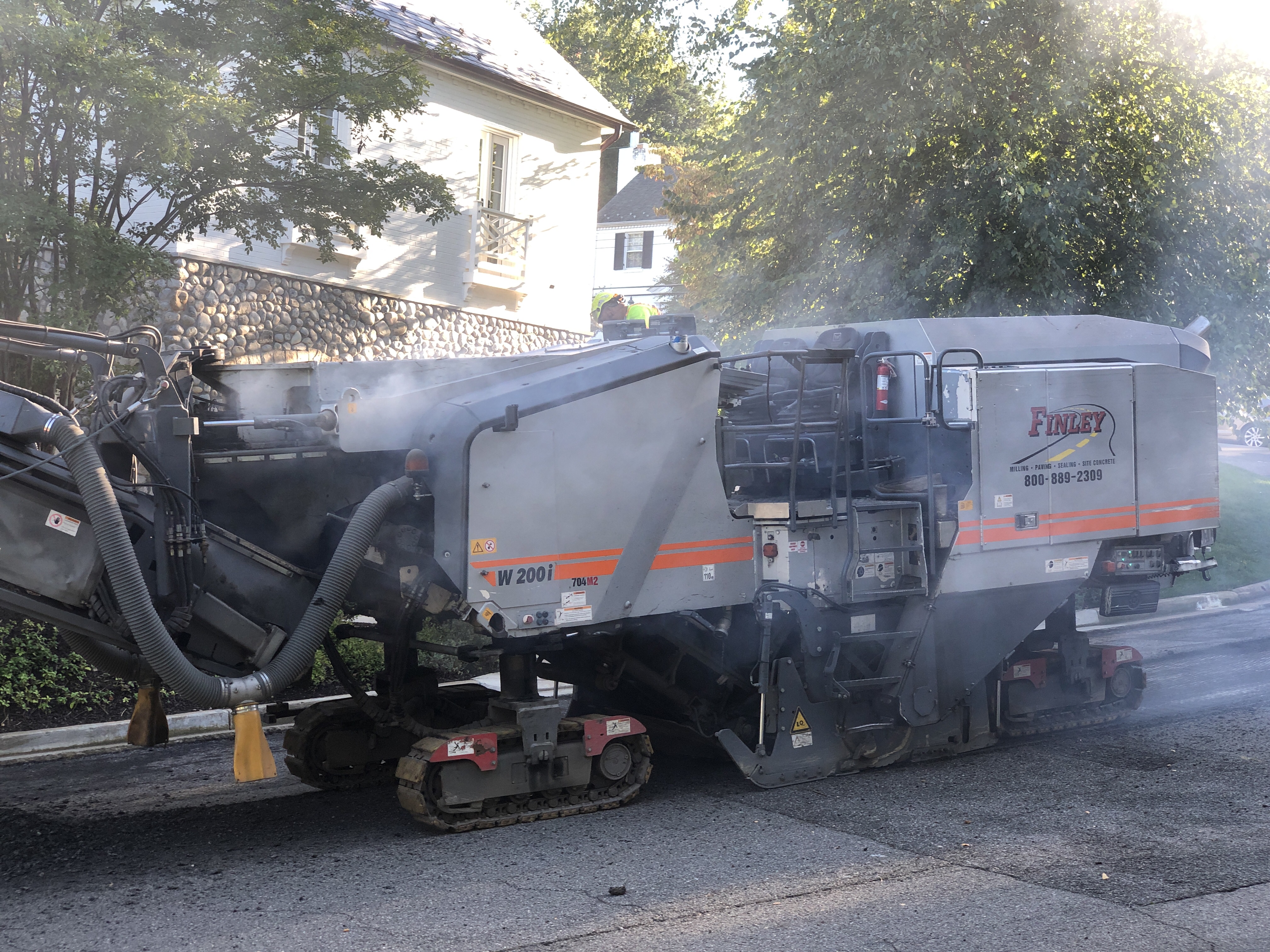 Putting down the hot asphalt after scraping.

The equipment used is very tall, so sometimes trees close to the road or overhanging the road get damaged by the paving machines. Once a paving machine got too close to a tree and it caught fire, but the excitement was short-lived. Trim your trees if you don’t want them snagged by the trucks.

Arlington roads are a small piece of the U.S.-wide program of repaving: the Federal Highway Administration says there are 72 million lane-miles of road in the lower 48 states and the U.S. builds roughly 30,000 lane miles per year on top of that, adding roughly 60 square miles per year to the land covered by roads.

Hundelt says asphalt is not a “green” surface since it’s full of petrochemicals, but it’s the only alternative, right now.