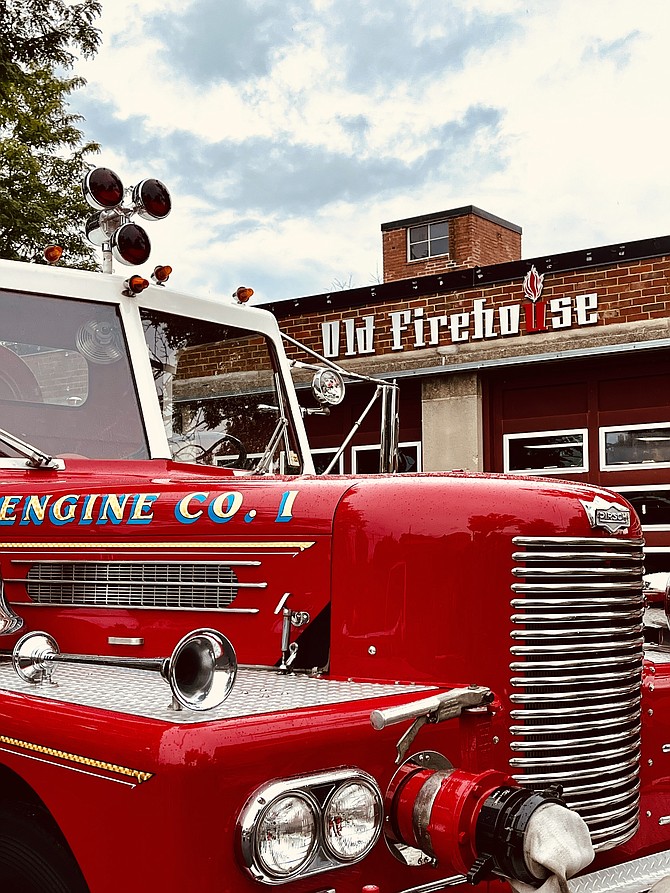 More than two years after installation, on Sunday, Aug. 21, the Fairfax County History Commission and others celebrated the dedication of the 32-inch-by-42-inch historical county roadside marker commemorating the McLean Volunteer Firehouse. The historical marker is affixed to a 10-foot pole in front of the McLean Old Firehouse Center, streetside at 1440 Chain Bridge Road in McLean. According to Fairfax County Historic Preservation and Heritage Resources, the ceremony was scheduled for 2020, but pandemic restrictions postponed the event.

"This old firehouse stands as a reminder of McLean's early history in civic pride. It is a testament to the countless number of volunteers, both men and women whose dedication and spirit honor we celebrate today," read Mary Lipsey, a representative on the Fairfax County History Commission and chair of the marker program, from a letter by Supervisor John Foust (D).

Local officials attended the celebration, among them Paul Kohlenberger, president of the Greater McLean Chamber of Commerce; Anne Stuntz, president of Historic Vienna, Inc.; Evan Braff, acting executive director of the McLean Community Center; and Clyde Clark. Clark has been with the Volunteer Fire Department for 60 years and has served 20 years as the volunteer chief at the McLean Station.

Representatives from the  Fairfax County History Commission and the McLean Historical Society, two of the organizations that sponsored the marker, prepared to ceremonially "unveil" the buff and blue historical marker emblazed with the Fairfax County seal. The county's distinctive colors are derived from the Fairfax Militia uniform worn by George Washington. Members of the McLean Community Center and McLean Volunteer Fire Department provided event assistance, and the public joined the celebration at the Old Firehouse Center.

According to Carole Herrick, president of the McLean Historical Society and member of the Fairfax County History Commission, the area surrounding the fire station was once farmland. Locals recognized the need for firefighting services in 1916. However, they did not incorporate as the Volunteer Fire Department until 1923.

The station was designated Company No. 1 because it was the first chapter of its kind in Fairfax County. A two-bay cinder-block station was constructed in 1925 and expanded in 1932.

Herrick retold stories she heard from old-timers about weekly chicken dinners upstairs in the firehouse. According to Herrick, a four-sided cupola on the firehouse was used to spot potential enemy aircraft during World War II. As the population grew, a larger, expanded station became essential. In 1948, a station with four bays replaced the previous structure.

Herrick described in-station Thanksgiving turkey shoots. She said people aimed their firearms out sight windows at a target placed in a field roughly where CVS is now. "I guess if you hit the target, you got a turkey. I'm not sure really how it worked, but there were turkey shoots, and they were a big deal," she said.

In 1949, the county started hiring firefighters. Samuel Redman was the first paid firefighter. According to Herrick, Redman was issued badge #1 and assigned to Station 1, McLean. Redmond Drive is named after him and is located adjacent to the station.

When the new station opened on Laughlin Avenue in 1988, the vacant firehouse was ceded to Fairfax County. The McLean Community Center converted it into a teen center.

"Today, it remains a vibrant part of our community serving not only teens but seniors and individuals with physical challenges. Old-timers I spoke to earlier would be pleased," Herrick said.