When it comes to selflessly serving Fairfax City, Dale Lestina’s name is at the top of the list. And on Dec. 5, in recognition of his five decades as a community activist, Fairfax Mayor David Meyer and the City Council presented him with the Fairfax Award. 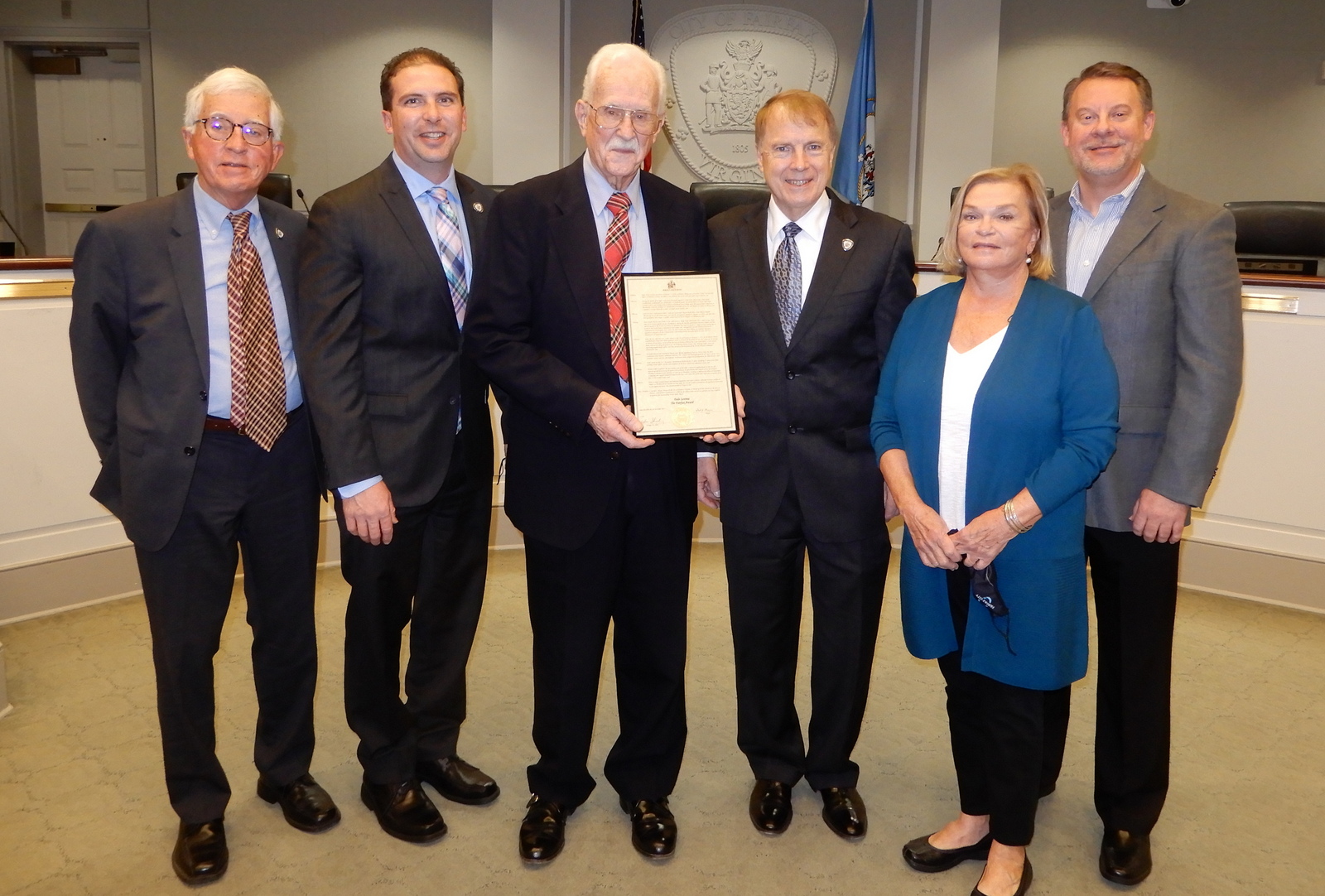 “It’s the highest award the City gives for outstanding community service over a lifetime,” said Meyer. “We’ve had remarkable recipients over the last 30 years, but no one is more deserving than Dale Lestina. His leadership in strengthening neighborhoods – in Mosby Woods and across the City – and promoting economic development, improved housing, and arts and culture is unsurpassed.”

A physics major in college, Lestina initially became a physics teacher. He then served as chief lobbyist for the National Education Association – and as such, was instrumental in the establishment of the U.S. Department of Education.

He and his family moved to Fairfax in 1971, settling in Mosby Woods, and Lestina’s tireless activism improved the quality of life not just for his own community but for all Fairfax residents. Similarly, his late wife Bonita, a talented artist and pianist, founded the Bonita Lestina Old Town Hall Performance Series, which continues bringing free concerts to City residents.

As for Dale Lestina, he served on the city’s Economic Development Authority for 17 years, including 12 years as chair; headed the Fairfax 2020 Commission in the early 1990s; and helped create the City’s nonprofit Renaissance Housing Corp., which provides affordable home-improvement loans to City residents. Now 85, he still serves as its president.

He was also president of the Mosby Woods Community Assn., led the effort to bring all of Mosby Woods within the City’s boundaries and chaired the I-66 Citizens Coalition, fighting for the construction of sound walls to reduce traffic noise for Mosby Woods residents. In addition, he and resident George Snyder created Block Watch to end drug dealing in Mosby Woods Park – which in 1988 was renamed Dale Lestina Park.

“The Fairfax Award was created in 1992 to recognize people who made exceptional, lifelong commitments to our City life,” Meyer told the crowd. “And I express my appreciation to all of you who make a difference to our City.”

Mason said there are just a few community leaders who’ve had such an extended and lasting impact on Fairfax. “We became a city in 1961. By the ’90s, when I was mayor, we were at a crossroads, and we were concerned about being complacent. We had to look at where we wanted to be in 20 years.”

So in 1992, the City created the Fairfax 2020 Commission to determine the City’s goals. Lestina chaired it, presiding over its 12 committees, including one dealing with entrepreneurial leadership for a livable city.

“Another committee was called, ‘The City as a Community,’ which let to today’s slogan, ‘Live Life Connected,’” said Mason. “The City’s motto is ‘Speak, Do;’ we did the speaking and Dale did the doing.” Then, noting Bonita’s contributions to music and the arts, Mason added, “That’s a family that made a difference in our community.”

Next, former councilmember, Allen Griffith, shared some memories. “I moved to Mosby Woods, 42 years ago,” he said. “Five minutes later, I was recruited by Dale to work with him. I learned half of our community was in Fairfax County – and after a 2-foot snowfall, the City snowplows stopped plowing at the line.

“That energized us to do something about it; Dale was president of the community association, and I was on the board, and Dale built consensus. Some 250 homes were affected, and we had to convince City Council to vote to make a change and ‘Free Mosby Woods.’ The vote passed, and all of Mosby Woods eventually became part of the City.”

Years later, when Griffith headed the community association, the residents campaigned for a sound wall to protect them from the noise of an additional lane being built on I-66. “Working behind the scenes, Dale got 25 community associations to form a coalition to fight for it,” said Griffith.

“We testified before the CTB [Commonwealth Transportation Board], Dale had a recording of the I-66 noise played for the CTB, and we got the sound wall,” he continued. Praising Lestina’s leadership skills, Griffith said, “It’s my honor to have known and worked with him.”

Likewise, Jim Shipp, secretary of the Renaissance Housing Corp., said, “We’re very proud of Dale – he’s one of the finest men I’ve ever known. Through his leadership and guidance, we’ve been able to set our sights on the future and improve things here, quite a bit.

“Dale spearheaded the creation of the Renaissance Housing Corp. to upgrade and expand the City’s housing stock; and after 20 years, he still serves as its president. We make home-improvement loans at no interest, for the first two years. We’ve now completed 240 projects worth $21 million. Dale’s one of our unsung heroes, and the City’s a better place because of all the work he’s done. His salary is $0, but he’ll now have a plaque expressing the appreciation of the residents of Fairfax City.”

Meyer then read an official proclamation listing Lestina’s many achievements and presented it to him. “He always worked with us in a way that was affirming and supportive of everyone – and that’s a rare skill,” said Meyer. Next, he and the City Council gave Lestina the Fairfax Award, a crystal bowl, after which the crowd gave the recipient a standing ovation.

“I’m full of emotion,” said Lestina. “I know the people in this room as good friends and neighbors, and this is a wonderful place to live. You can’t stop change, but you can shape it some, so it benefits our quality of life. Many times, it takes some help, and that’s where your City organizations and Council come into play. So you owe it to yourself to find out your community’s issues and give your input on them.”

“Thank you to every one of you for the things we’ve done together,” he continued. “We’ve still got work to do – and ever will it be such – so let’s do it in a positive way. Thank you all for this wonderful honor; I appreciate it.”