The Show Must Go On in Arlington
Votes

The Show Must Go On in Arlington 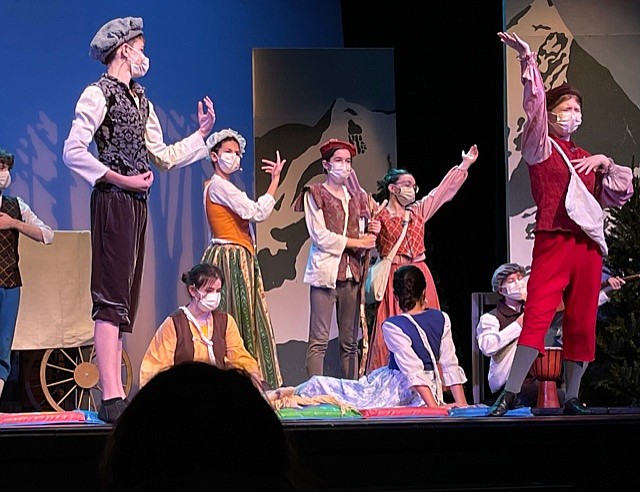 The band of troubadours on their way to the village performance in Encore Stage and Studio’s performance of Commedia Cinderella.

COVID cases escalated. Snow closed the schools. The scheduled opening of Encore Stage and Studio’s performance of Commedia Cinderella was postponed until Jan. 14 and 15 at Gunston Arts Center. But it opened amid Saturday’s cold and Sunday’s projected snowstorm. 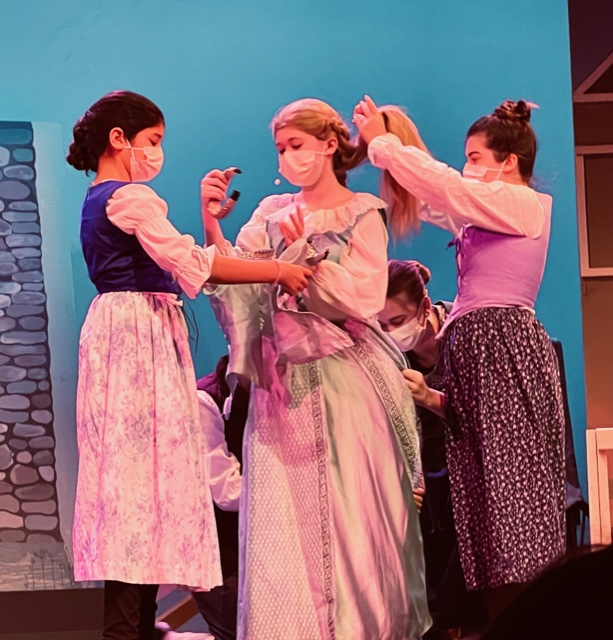 Cinderella gets transformed in her ball gown for the prince’s ball.

This version of Cinderella is based on the Italian tradition of commedia dell-arte or exaggerated characters. It was traditionally performed by a band of troubadours who traveled from town to town giving impromptu outdoor performances. The play opens with the band of troubadours building a fire at their camping spot and practicing their dramatic abilities and boasting about their acting skills with endless squabbles.

A goatherd helps the troubadours get the needed permit to perform in the village by bargaining for a role in the play. The role gets negotiated to the “hear ye, hear ye” announcing the arrival of the troubadours to the village.  The plot then transforms into a play within a slapstick play as the lonely prince announces to the kingdom that he will hold a grand ball to choose his princess.

The not so classic Cinderella tale unfolds as Xander Tilock trades his Punchinello character for a garish wicked stepmother dress and Cinderella’s stepsisters are wicked indeed. Cinderella gets a visit from a sparkly pink fairy godmother who has brought her skills out of retirement.  A pumpkin coach, built onstage for Cinderella, carries her to the ball where the prince dances with her all night, she loses her shoe at the stroke of midnight, and you know all the rest.

ENCORE HAS ADAPTED to the ups and downs of COVID by shutting down for a while, holding performances outside and gradually working back to indoor performances with vaccinated actors and masked performances and all appropriate protocol for the audience. The theater attracts actors from all over the area, ranging from Swanson, Longfellow, Gunston, Dorothy Hamm and Williamsburg middle schools, to Langley and Meridian high schools.  A number of the cast and crew have participated either as actor or crew in a number of performances from Sofia Coquis with Cinderella as her first production to Xander in his 22nd production.

Encore Stage and Studio engages kids on both sides of the curtain, inspiring young people to learn, grow and succeed.