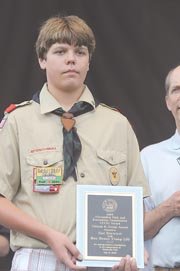 As an Eagle Scout, Zac Stewart designed a beautification project for Monticello Park. He developed plans to rebuild and update the sign board at the entrance of the park, to remove brush, ivy and debris; to plant trees and shrubs, and to repair several foot paths. On Dec. 6, of last year, Zak and a squad of youth from Boy Scout Troop 129, along with approximately 50 other volunteers executed Zac’s plans. All of the planned projects were completed including the planting of 50 plus oak saplings.