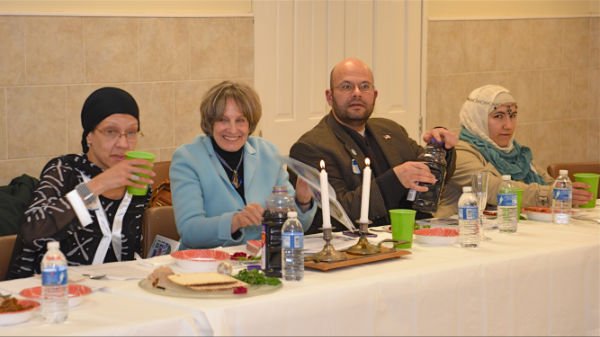 From left, Farhanahz Ellis, the interfaith and outreach director for ADAMS, Andrea Barron, organizer of the Seder for Washington Area Jews for Jewish-Muslim Understanding, ADAMS board member Rizwan Jaka, and his wife Priscilla Martinez, herself a local political and community activist, sit together at the interfaith Passover Seder.

With one foot in Fairfax County and the other in Loudoun, (yes, they needed permits from both counties during construction) the All Dulles Area Muslim Society (ADAMS) Center in Sterling couldn’t have been a better choice of venue for an interfaith commemoration of Passover, the ancient Jewish holiday celebrating the exodus of the Israelites from Egypt over 3,000 years ago. The building, with its cross-counties placement, symbolizes the bridge building that took place on Saturday, March 30, when members of the ADAMS Center co-sponsored a Passover Seder with the Washington Area Jews for Jewish-Muslim Understanding, led by Andrea Barron. Sitting side-by-side in the small meeting room were Jews and Muslims as well as Christian pastors from Falls Church and Reston.