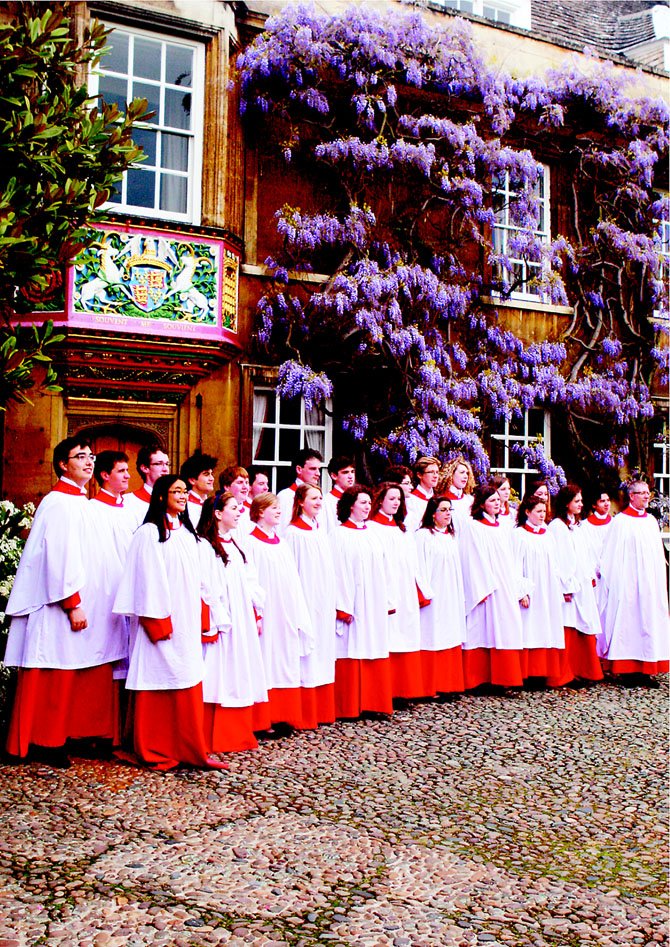 The Choir of Christ's College Cambridge.

The Choir of Christ's College Cambridge will tour the East Coast of America this coming July, performing from Boston to Washington. They will appear at Memorial Baptist Church, 3455 North Glebe Road on Sunday, July 21 at 6 p.m. Tickets are available at the door. Visit www.cambridgechoir.co.uk. Other venues include the National Cathedral, Washington; Holy Trinity, Rittenhouse Square, Philadelphia; St Michael's Church, New York and St John the Divine, New York.
The Choir undertakes a major international tour each summer, and is very excited to be coming to
Arlington. The Choir have recently toured Canada and the West Coast of America (2012), Australia (2011),
and Europe (2010) to high acclaim.
Repertoire will include: Britten's Hymn to St Cecelia and Festival Te Deum, Howell's Take him, earth, for cherishing, Parry's Songs of Farewell and Blest pair of sirens, Stanford's For Lo! I raise up and works by Bach, Fauré, Gibbons, Purcell, Rheinberger, Saint-Saëns, Tallis and Walton. The choir will sing Evensong and Eucharist in Falmouth, New York, and Washington.
The Choir will bring a selection of their most recent CDs, available to purchase during the tour. Recent recordings include repertoire by the French Romantic composers, Scarlatti, Britten and Howells, and Ledger.
As one of Cambridge's mixed-voice ensembles, the Choir's raison d'etre is to sing Evensong twice a week in the College Chapel, alongside performances at feasts, weddings, memorial services and other occasions. Outside College, the Choir perform concerts in Cambridge and around the UK, recording CDs, broadcasting, and undertaking a major international tour each Summer. The 28 members are selected by audition to maintain an exceptionally high musical standard, most holding Choral Scholarships or Exhibitions.
The Choir's repertoire embraces sacred and secular music from the 15th century to the
present, with a broad concert repertoire including Bach's Mass in B minor and St John
Passion, Handel's Messiah, Vivaldi's Gloria, Bach and Brahms motets, masses by Mozart and
Kodaly, extended works by Howells, Britten, Faure and Parry, and a selection of secular
music.