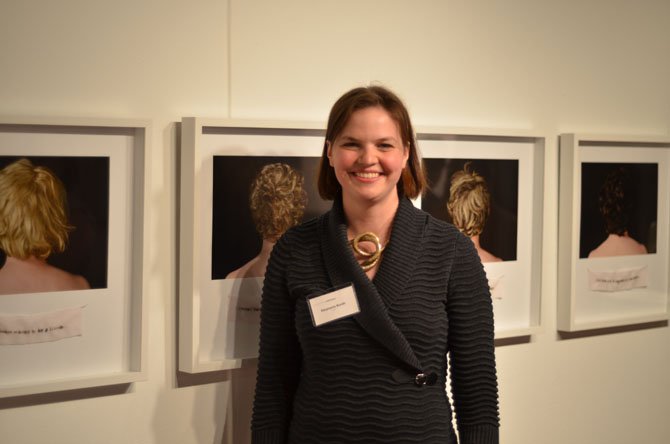 Artist Stephanie Booth stands next to a series of self-portrait photos she took wearing her grandmothers’ wigs. Some of Booth’s work will be on exhibit at GRACE until March 1.

“I am really thrilled with the level of artists we were able to bring to this exhibition,” said Holly McCullough, executive director and curator of exhibitions at the Greater Reston Arts Center (GRACE). “The work is such varied interpretations of needlework that it makes you rethink your preconceptions of what needlework is … the artists reverse our expectations of the medium.” The exhibit STITCH is a group exhibition of needlework and its incorporation into forms of contemporary art. On Thursday, Jan. 16, an opening reception at the GRACE art gallery was attended by many of the exhibiting artists. “Negative space often plays a role in my work,” said Pam Rogers, a resident of Bethesda, Md. “I make my paint out of soil in minerals in my art work … often I sew into the work, creating new planes, repairing embellishing the images.”