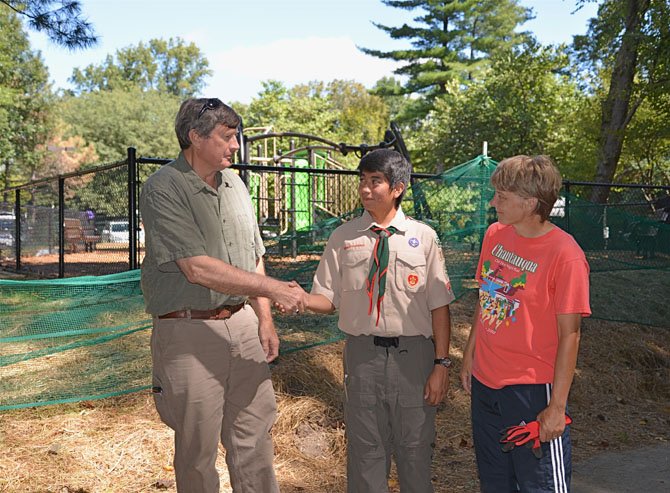 From left—Wayne Brissey, manager for Area 6 with the Fairfax County Park Authority Park Operation Division, Scout and Project Manager Ethan McKnight of Reston, and mom Carrie McKnight take a moment to congratulate themselves on the improvements being made to the Stuart Road Park in Reston, thanks to Ethan’s community motivational efforts as he seeks to earn his place as an Eagle Scout.

Ethan McKnight of Reston needed a project to graduate to Eagle Scout in Troop 1577. His neighborhood pocket park needed some additional work to go along with the renovation-in-progress by the Fairfax County Park Authority. It seemed like a good fit to seventh-grader Ethan, so he got to work. First he had to get the sign-off from his troop leaders. Then came the more intimidating moment—contact with the Park Authority to explain his proposed project and get the necessary approvals. “It went really good,” said the young McKnight. “Mr. Brissey has been really amazing and helpful to work with,” he added, referring to Wayne Brissey, manager, Area 6 with the Park Operation Division. Once the project was outlined and approvals were secured, Ethan took to the streets around the park, soliciting donations of time, as well as money to make the plan come to life. He must have been pretty persuasive, because not only did he come up with the funds, but on Implementation Day he had gathered a small army of locals and a few other troop members to get the work done. Even Brissey was on hand to provide some supplies and assistance. “This is such a great win-win event,” said Brissey. “With our budget down 25 percent, we were able to put in the needed new equipment, do drainage improvements and work on the trees around the tot lot, but there just isn’t the money to work on the surrounding area.” So Evan’s crew got to digging, hauling, raking and mulching the outdoor exercise area. They even built handicap-accessible picnic tables from materials provided by the county. The workers stayed busy from 9 in the morning to late in the afternoon, but were kept refreshed by beverages and snacks provided by the McKnight family. The crew deemed themselves well satisfied with their efforts and with Ethan for getting the community ball rolling. —Andrea Worker