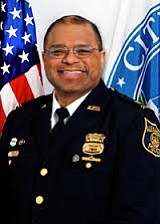 After a 37-year career in law enforcement, Alexandria Police Chief Earl Cook has announced his retirement from the force effective Oct. 1.

It is a shame that he is retiring. He was a very good Chief, our community will surely miss him. On the other hand, he earned it so I am also happy for him. I wonder when I will stop producing new padded envelopes and finally retire... ;)