Samuel Snowden and the early days of publishing in Alexandria. 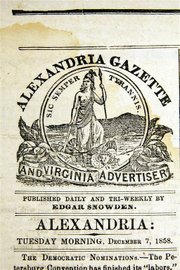 The &lt;i&gt;Alexandria Gazette Packet&lt;/i&gt; holds a distinct place in the history of American journalism. It has survived wars, fires and disease and competition. It has outlived all of its competitors, and it remains America's oldest continuously-published newspaper. Of the 55 newspapers that were founded between 1784 and 1935, the &lt;i&gt;Alexandria Gazette Packet&lt;/i&gt; is the sole survivor.

As Samuel Snowden was setting up his business and circulating a prospectus to potential advertisers, he arranged the purchase of one of his competitors, &lt;i&gt;The Columbian Mirror and Alexandria Advertiser&lt;/i&gt;. Snowden's other competitor, the &lt;i&gt;Alexandria Times&lt;/i&gt;, folded in 1802 when publisher James Wescott moved into the District of Columbia to start the &lt;i&gt;Columbian Advertiser&lt;/i&gt;. Because of Snowden's purchase of the &lt;i&gt;Mirror&lt;/i&gt;, the modern-day &lt;i&gt;Gazette&lt;/i&gt; traces its history to 1784 — a lineage that includes three previous newspapers and one shared press.

That press, purchased by Snowden in 1800, was the original press that published the city's first newspaper in 1784. When the &lt;i&gt;Gazette&lt;/i&gt; replaced it in 1815, parts of the old 18th-century printing materials ended up in a well behind the house where Snowden lived with his father-in-law, John Longden, at 105 South Royal St.

Those old letters and spacers — bits of the 1784 press — were probably given to Edgar Snowden to play with as a child. Little did anybody know that the son would follow in the father's footsteps and publish the &lt;i&gt;Gazette&lt;/i&gt; for several decades. When the unit block of South Royal Street was excavated to build the Holiday Inn, Edgar Snowden's childhood toys emerged from rubble and debris — relics of a different era in Alexandria, detritus that helps Old Town understand its past.

The evidence taken from the Longden's well on South Royal ties the modern newspaper to the one founded in 1784. The old letters and spacers, now in the possession of the city's Archeology Museum, form a continuum between the past and the present — allowing a glimpse into another time.

&lt;b&gt;WHEN THE REVOLUTIONARY WAR&lt;/b&gt; came to a close with the Treaty of Paris, Alexandria experienced a postwar boom. Taverns were constructed, homes were built and ships came streaming into the ports. The city was struggling to keep up with the pace of independence.

It was in the midst of this change, just one month after the treaty had been signed, that Alexandria's first newspaper appeared on the scene. Published by George Richards, the &lt;i&gt;Virginia Journal and Alexandria Advertiser&lt;/i&gt; was a weekly newspaper that was published at the corner of Fairfax and Princess Streets. Existing copies offer a unique glimpse into the life of the times: masters looking for escaped slaves, merchants hoping to sell wine from France and a newspaper publisher who was dedicated to his craft.

Not much is known about Richards other than what was published in his newspaper. He was a member of the Sun Fire Company and the Alexandria Masonic Lodge. When he unexpectedly died, his press stopped. But not for long. Samuel Hanson and Thomas Bond soon took over, using Richards' press to publish the Virginia &lt;i&gt;Gazette and Alexandria Advertiser&lt;/i&gt;. The weekly newspaper was published on Prince Street, "next door to Col. Hooe's," as the paper described the location. The paper was discontinued in 1793, when Hanson moved to Georgetown.

But Richards' old press remained in Alexandria, and it was used to publish the &lt;i&gt;Columbian Mirror and Alexandria Gazette&lt;/i&gt;, a semi-weekly newspaper established by John Smith and Ellis Price. Smith soon left, and Price retired. William Fowler took over as publisher Sept. 16, 1800 — four months before selling his newspaper and its press to Snowden.

&lt;b&gt;SAMUEL SNOWDEN&lt;/b&gt; was born in 1776 near Piscataway, N.J. Little is known of his life before he came to Alexandria in 1800, but soon after his arrival in the city he married Nancy Longden. Her family was one of the most prominent in town, and his marriage into it March 3, 1800, helped establish him within the framework of city life at that time.

Her father was John Longden, the last living member of Light Horse Harry Lee's Legion — son to Thomas Longden, who was a volunteer in Gen. Edward Braddock's army. Lee's Legion was legendary in Alexandria, and Snowden benefited from being associated with it. The Longden's status and wealth served Snowden well, and he moved into their house at 105 South Royal St.

Mathew Brown and Samuel Snowden published the first issue of the Alexandria Advertiser and Commercial Intelligencer Dec. 8, 1800, in their office on King Street, "a few doors above the Washington Tavern."

At the top of the front page, a portrait of George Washington was placed above the paper's name. The first issue explained that presence of Washington's portrait was intended to honor the "eminent virtues" and "wide administration of the immortal patriot of Mount Vernon," who had died the year before.

The next day, Dec. 9, Snowden and Brown purchased the &lt;i&gt;Columbia Mirror and Alexandria Gazette&lt;/i&gt; from William Fowler. They wanted their newspaper to succeed, and they knew that Fowler may have depleted the necessary stock of advertisers needed to run their new paper.

There was another newspaper in Alexandria at the time, a competitor that Snowden and Brown did not purchase — &lt;i&gt;the Alexandria Times&lt;/i&gt;, which was published on the west side of the unit block of North Royal Street. Established April 10, 1797 by John Thomas and James Wescott, the&lt;i&gt; Times &lt;/i&gt;was the Alexandria's first daily newspaper. The paper was discontinued July 21, 1802, because Wescott moved to the federal city to publish the &lt;i&gt;Columbian Advertiser&lt;/i&gt;.

Nevertheless, the purchase of the &lt;i&gt;Columbia Mirror and Alexandria Gazette&lt;/i&gt; was an important event for two reasons: Not only did it create a more hospitable business environment for Snowden and Brown, but it also gave them possession of that old 1784 press — and everything that came with it.

&lt;b&gt;SNOWDEN WAS A FEDERALIST&lt;/b&gt;, and he used his newspaper to advocate for manufactories, a protective tariff and an assumption of state debts. He favored a strong national government, a broad interpretation of the Constitution and a financial policy that was based on industrialization, commerce and urbanization.

In those days, Alexandria was a Federalist stronghold. As late as 1814, nine of the 16 members of the city's Common Council were Federalists. Although many in town would probably disagree, the &lt;i&gt;Boston Patriot&lt;/i&gt; once suggested that Alexandrians willingly submitted to the British siege during the War of 1812 because city residents were so solidly Federalist.

Snowden was not a supporter of Jefferson. When the General Assembly voted in 1806 to praise the "wisdom, virtue and firmness of the President of the Untied States," Snowden was not pleased. In his newspaper, he called the measure "foolish and absurd."

Snowden was unenthusiastic about the War of 1812. The newspaper criticized President James Madison's message to Congress about the outset of war because it said "so little about the misconduct of France towards the United States." Snowden felt that the evils of impressments of American sailors by the British — the purported reason for the war — had been "unwarrantabley magnified by the government," as an excuse for President Madison's invasion of Canada.

He remained critical throughout the duration of that war, constantly criticizing Madison. Not only did Snowden think that Madison took the nation to war on trumped-up charges, but he also believed that Madison did not adequately plan for the realities of war. The editors indignantly reported that volunteer troops had nothing to eat for 36 hours but green peaches and the bark of trees.

When Andrew Jackson successfully defended New Orleans at the dramatic climax of the war, Snowden could barely contain his contempt. After the Alexandria Herald suggested that city residents illuminate the town in celebration, Snowden told readers that they should instead "clothe the naked, feed the hungry and buy fuel for those who are perishing with cold."

To Snowden, Napoleon was the "Scourge of Europe." When news of his defeat reached Alexandria, the newspaper's editors announced their "utter inability to express the feelings of joy and rejoicing."

&lt;b&gt;SNOWDEN'S LONG CAREER&lt;/b&gt; came to an end upon his death in 1831. The Snowden family continued to operate the newspaper until 1911, overseeing more than a century of journalism in Alexandria.

Upon the death of Samuel Snowden, his sons took over the business. Three of his sons served as editors of the paper, but one eventually took over the operation: Edgar Snowden. Trained as a lawyer, Edgar was a Whig and an advocate for an industrialized South.

In 1836, while still editor of the newspaper, he was elected to the City Council. He was elected mayor of Alexandria March 6, 1840. He served as mayor until 1843, a time of prosperity for the Snowden family. This was when he purchased the home at 619 South Lee St., known today as the Snowden Home. It was in the family for more than 60 years, and was later owned by Justice Hugo Black, who lived there while serving on the Supreme Court.

Edgar used the newspaper to advocate many causes, especially "retrocession" of Alexandria back to Virginia. This was finally accomplished in 1845, and Edgar was promptly elected as a Whig to represent the city in the Virginia House of Delegates.

On Jan. 2, 1871 — four years before his death — Edgar Snowden wrote a note to readers of the newspaper about the Snowden family and the newspaper's longevity: "The &lt;i&gt;Gazette&lt;/i&gt; was established in this place by the father of the present editor in 1800. It is, therefore, one of the oldest newspapers in the United States. To have survived all the changes and chances of seventy years is not often to be recorded of any public journal in this country."