Dancing in the Holidays
Votes

Dancing in the Holidays 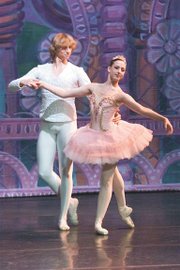 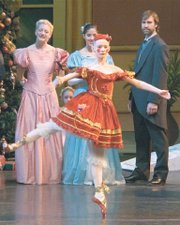 They come from different communities and attend different schools, but the students at the Conservatory Ballet of Reston share a dedication and hard work for dancing and ballet. More than 130 of them have an opportunity to showcase years of hard work during the upcoming production of "Nutcracker," the conservatory’s 36th annual.

"We are a little nervous, but I think it’s going to be really good this year," said Lexie Overholt, 16, of Oakton. The junior at Bishop O’Connell has been dancing at the Reston Conservatory for 13 and a half years. Overholt, whose ballet accomplishments include a summer program at the American Ballet Theater and feature in Dancer Magazine, said every year the show has more advanced choreography and the dancers spend more time rehearsing. "Every year the show steps up a notch," said Overholt.

While Overholt has spent more than 13 years at the Reston institution, McLean resident and McLean High School freshman Elza Lambergs, 14, is in her first year at the dance academy. Lambergs, however, has been dancing since she was 5 years old, and moved to McLean a year ago from Boston. She is excited about her first "Nutcracker" with the Reston Conservatory. "The parts are really interesting and the dances are well choreographed," said Lambergs.

"Truly, overall it’s a magical show," said Langley High School sophomore Mary Kate Kronzer, 15, of Herndon. "It just really gets you into the holiday spirit and it’s fun, and we have lots of fun performing for the audience," she said.

"THIS IS GOING to be one of our best ones," said Julia Redick, the academy’s director, comparing this year’s show to the shows in the past. "The kids are ready," said the former ballerina from Hungary.

While the excitement in the dancers preparing for the show is evident, it is also evident that they grew up with the dance program to become one another’s best friends. "It’s a nice family," said Alexia Redick, the marketing director and one of the academy’s instructors. "I’ve had some of these kids since they were in diapers," she said, adding that several of the teachers were once students at the dance academy.

Kronzer was 4 when she first came to the Reston Conservatory. "We’ve really grown up together," said Kronzer about the time spent with fellow dancers at the academy. "Everyone here is so nice, and if it wasn’t a very good learning experience I wouldn’t be here," she said.

Overholt, whose current plan is to defer from college for a year so she could explore ballet opportunities, said Julia Redick is like a second mother to her. "All my best friends are here. It’s a big family," said Overholt.

For the most part, the dancers in the show do not change their roles from year to year, but play the same role so they can continue to improve on the prior years of work. Therefore, rehearsing for this year’s performance started years ago for many of the show’s dancers. For Kronzer, rehearsing these days means she gets to the conservatory right after school on the weekdays and rehearses until 9:30 or 10 p.m. "It’s very intense," she said.

THE FRIENDSHIPS formed at the dance academy transcend school and community boundaries as well as age boundaries. The younger dancers in the academy look up to the older dancers to improve. Colleen Calpin, 13, Vienna resident and Longfellow Middle School student, will perform in the show as the First Columbine Girl. "I am pushing myself close to my limits," said Calpin. "I am trying to make the show the best it can be," she said.

Eleven-year-old Vienna resident, and student at Flint Hill Elementary School, Grace Rogers said it is exciting to perform in front of large crowds. "I am working really hard," said Rogers. With some newer roles this year she, too, is pushing herself to her limits. "I do look up to them and I hope I can be as good as them," said Rogers about the older students at the academy.

The show will feature about 130 students, about 15 of them boys, ages 5 to 17. Five of the performers, including the Cavalier, Stanislav Bolotsko of Oakton, are graduating Conservatory Ballet Curriculum students. Tanya Hilleary, a parent of a four-year-old boy at the academy, said she is amazed with the show’s level of detail. "These costumes, you wouldn’t see them at a youth performance," she said.

The performances are scheduled on several dates from Dec. 5 through Dec. 15 at the Reston Community Center at Hunters Woods and The Madeira School in McLean. For more information visit www.conservatoryballet.com.