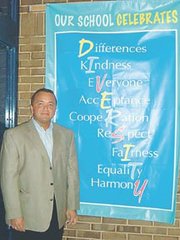 A weeklong celebration of differences was in order at Armstrong Elementary School, from Dec. 3 to Dec. 7, as students and school staff participated in a series of activities emphasizing diversity. The celebration was a part of a larger initiative from Fairfax County Public Schools, the Inclusive Schools Week.

The week culminated with Different Shoe Day, as students wore a different shoe on each foot to highlight diversity, on Friday, Dec. 7. During the week, students also heard from Armstrong students who come from other countries, and teachers who traveled to other regions of the world. A teacher’s trip to Costa Rica was highlighted.

"The students embraced it tremendously," said Wolfe, adding that about 70 to 75 percent of the student population chose to participate in the week’s activities. "We do have a growing diversity in our school, and we hope to be able to highlight it year-round," he said.

Wolfe said this year’s talent show at Armstrong, compared to talent shows of years past, is an example of evidence that the school increasingly draws its students from a variety of backgrounds. "Usually in talent shows you have piano playing, singing and dancing," he said. "This year we saw things that were a little bit different, for example belly dancing." Wolfe said there are more Hispanic and Middle Eastern students at the school than in previous years.

The weeklong celebration did not only focus on cultural differences, but also on celebrating differences between students with different needs. For example, Wolfe said the autism teachers in the school were tremendously helpful in teaching the entire student body about the needs and the opportunities of the students in the emotional disabilities program at Armstrong.

Wolfe said the school promoted the weeklong celebration in its community because celebrating differences is a part of the school’s culture. He said some of the activities, including Friday’s Different Shoe Day, have sparked conversations among the students in the school. "Anything that we can do to try to increase acceptance, we will do," said Wolfe.