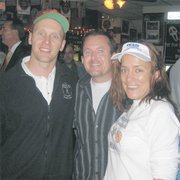 Alexandria resident Julie Pfluger lost her father to Leukemia when she was 18 years old. Nearly 20 years later, she found a way to fight the disease.

"There was nothing they could do about it," said Pfluger about her 43-year-old father dying two months after the diagnosis.

The 37-year-old attorney for the Justice Department decided last year to run a marathon to raise funds for the Leukemia and Lymphoma Society. Pfluger said she was a straight A student in high school, but could not pass her gym classes. Prior to running her first marathon a year ago, Pfluger said she never ran more than three miles in her life.

However, Pfluger said, her training for a marathon does not cause nearly as much strain on her body as does chemotherapy to patients of leukemia and other cancers. While she lost her father 20 years ago to the disease, Pfluger is running a marathon this year in honor of two young girls fighting the disease now — Becky, 5, and Liesl, 1. "Whatever I have to do is not nearly as bad as what they’re going through," she said.

That attitude inspired Pfluger’s boyfriend, Jerry Noble, 36, of Ashburn, to join the team for this year’s marathon. When he was 19, Noble tore his calf muscles training for the Marine Corps Marathon. Other consequent injuries made him believe he would never run again, something he enjoyed very much growing up.

"Meeting Julie while she was training for the marathon reminded me how much I did like to run," said Noble. He joined Pfluger’s team and began training for this year’s marathon. Noble said the old injuries kept coming after him, hurting him in the training process, but while training one day he saw the back of one of his teammates’ shirts. The shirt read: "If you think training is hard, you should try chemotherapy." He is seeing a surgeon to see what can be done to help him finish the marathon. "I can certainly push my body a little bit," he said. Noble said that his reason for pushing his body to finish the 26.3-mile marathon has also changed. "When I started this, a lot of this was about me. It is no longer about me," he said, adding that he is running for people battling the diseases.

ON THURSDAY, Oct. 25, Pfluger and Noble hosted a happy hour at Jimmy’s Old Town Tavern in Herndon, raising $2,800 for the Leukemia and Lymphoma Society. The money was raised through tips for guest bartending and raffles of prizes donated by local businesses. "It was a huge success," said Noble, an employee of General Dynamics in Herndon. He said the couple chose Jimmy’s because it is his favorite establishment to visit and also because of the community role that the bar offers regularly. "Jimmy is a huge supporter of charities," said Noble.

With many marathons and charities to choose from for donations, the couple chose the Leukemia and Lymphoma Society because of its commitment to allocate a large percentage of the donations toward research for a cure. "It’s kind of a strange business model," said Pfluger. "Their business model is to put themselves out of business. Because of that society people do survive now."

PFLUGER AND Noble are training for the marathon under the Leukemia and Lymphoma Society’s Team In Training program. According to the society’s Web site, it is the world’s largest endurance sports training program. More than 300,000 people participated in the program, raising more than $700 million since 1988. "There is no way we would be where we are today without these volunteers," said Beth Gorman, deputy director of the National Capital Chapter of the Leukemia and Lymphoma Society. The fund-raising efforts average $4,000 to $5,000 from each participant. "That is money which equals research which equals cure," said Gorman. She said those who do train for events under the program are not only asked to give their energy, but also five to six months of their time.