Cyber Monday could foretell the future for large retailers

Old Town merchants had a good start to the holiday season and are looking forward to more shoppers in town for the annual Scottish Christmas Walk Weekend. 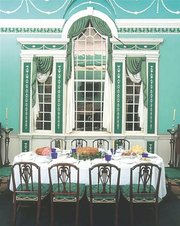 The main dining room at the Mount Vernon Estate is set for the holidays as the shops at Mount Vernon report the start of a good season.

Judging from interviews with merchants in Alexandria and Mount Vernon District, "Black Friday 2007" proved to be just that -- a day, and weekend, when red ink took a holiday.

In the big box category, sales at the Wal-Mart on Richmond highway "were higher than last year," according to assistant manager Tamara Hightower. "We were crowded throughout the weekend," she said.

"Like every year, electronics were big sellers. But, I also think that sales were up because we added items that we haven't offered before. Overall we have a much better selection this year," Hightower said on Monday.

Unfortunately, local Target management was not able to talk about their Black Friday weekend results. Managers at both their Richmond Highway and Potomac Yard stores were not even willing to say if it had been a good, mediocre or poor weekend for fear of bringing down the wrath of corporate upon themselves.

"I can not make any statements without the specific approval of corporate headquarters," said managers at both stores. When corporate media relations was called, only a message could be left for a call back — with no promise that one would arrive any time soon.

Maybe they missed the target.

That was not true for the vast majority of individual specialty stores in Alexandria and Mount Vernon District. All but one said that this year's Black Friday sales matched or exceeded those of 2006.

"As happens every year, it was slow Friday morning and then picked up considerably in the afternoon once people got tired of the mall crunch and finished their bargain rush," said Dorothy Trimber, owner of The Blossom Shop in Hollin Hall Shopping Center.

"For us, this particular weekend is mainly about shoppers finding unusual tree ornaments. They want something different for their tree and we have five fully decorated trees in the shop in five themes," she said.

"Sales were a little up from this weekend last year. However, we are waiting to see what the follow through will be for the rest of the holiday season. In fact, will there be a follow through?" said Bentley.

For Vennell, "Friday was great and then Saturday it was a little flat. But Sunday we had a very good day. It was somewhat ahead of last year. The slow point I attribute to those discount sales and long store hours at the big retailers," he said.

OLD TOWN Alexandria merchants get the benefit of a two-weekend holiday opener this year. With the annual Scottish Walk this weekend, merchants are looking forward to a second good retail weekend in a row.

"Scottish Walk weekend always proves better for us than Black Friday weekend. Although this year Black Friday was pretty good. It held its own with last year," said Kate Schlabach, owner of Why Not, 200 King St.

"The one thing that was different this year was that I had customers who wanted toys that had not been made in China. That wasn't a problem for me because we carry quite a few made in Germany, Switzerland and other places," she said.

"We did very well this year. We sold lots of calendars and Christmas cards," said Todd Healy, owner of Gallery Lafayette, located at the rear of Gadsby's Arcade, immediately across King Street from City Hall/Market Square.

Those sentiments were echoed by Stanley E. Rudy, owner of Wilfred-Rodgers, 320 King St. "It went very well this year. A little better than last year. And, the shoppers seemed to want to buy a little bit of everything," he said.

Betsey Husser at the Christmas Attic, 125 S. Union St., said, "We did very well. Much better than last year. We were packed all weekend and they were buying everything. Now it's a matter of getting restocked for Scottish Walk."

The only one to report a small drop in sales was Julia Mosley, director of retail for The Shops at Mount Vernon. However, she

attributed that to the fact that last year traffic was unnaturally high as people flocked to Mount Vernon during the holidays to visit the newly opened museum and education center.

"We were actually expecting a little dip this year due to the crowd leveling off for the new additions. But, it was still way up over two years ago. We were crowded all weekend and they were buying a wide variety of items. This year's collector ornament is selling like crazy," Mosley said.

THESE LOCAL reactions were in line with national shopper statistics but seemed to contradict sales figures. Although shoppers were up an estimated 4.8 percent over last year, the actual Black Friday weekend sales figures were down 3.5 percent with the average shopper parting with just over $347, according to the National Retail Federation.

Another big factor, which has been increasing each year, is shopping online. It doesn't require getting to the store the day before in order to be first for a 4 a.m. opening — no playing parking lot chicken for an open space, and no in-store crush with millions of your closest and dearest friends.

The Monday after Black Friday weekend has become known as "Cyber Monday." It is also becoming a double-edged sword for large retailers and their employees. However, it does not seem to have adversely impacted the small specialty shops.

But all this is just a prelude to the holiday shopping season. From now until the reindeers roll will be the real test. As Doug Bentley of The Gift Store so succinctly put it: "Will there be a follow-through?"