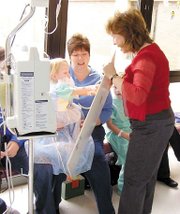 Pickleberry Pie performer and musical artist Carol Leon of Burke, brings a smile to an ill â€˜princessâ€™ in the Georgetown University pediatric ward.

Pickleberry Pie is not meant to eat, but for a sick youngster, it is a treat.

"As a music teacher, I know that music has healing powers," said metropolitan advisor of Pickleberry Pie, Irene Light of Vienna. "We bring our musical shows to patients in the pediatrics unit at Georgetown Universityâ€™s hospital and Inova Fairfax Hospital, and now, to troubled teens at the Kellar School."

Pickleberry Pie is a 501 C3 nonprofit organization with roots in California. Its goal is to use musicâ€™s healing power to improve the lives of children facing physical illness or emotional challenges.

Light dedicated more than 33 years of her life to preschool music instruction, developing a relationship with Viennaâ€™s Tiny Tots pre-school. After several years of entering Tiny Tots in contests that distributed free CDs to participants, Light stumbled upon references to childrenâ€™s hospital work, particularly that of Pickleberry Pie.

"I went to the Pickleberry Pie Web site and saw that they were looking for board members. I called them and said, â€˜I want to be a board member,â€™ and the woman said, â€˜you are.â€™ That was four years ago.

"At that time, most of the volunteer work for Pickleberry Pie was in California, still is. There was nothing on the East Coast, and when I asked them why not, they said it was because there was no one here to run the program," said Light.

Light brought the Northern Virginia/D.C. program to fruition in 2005 with borrowed money.

LIGHT AND her professional band of performers work together to create programs suitable and appropriate for different age groups from preschoolers to teens.

"In all these hospitals, child life people are running themselves ragged," Light said. "The kids are frightened, and the parents are worried. Music relaxes the children, it makes them smile. It takes their minds off their physical problems for a moment."

Many Pickleberry Pie performers are recognized nationally. Creator of "Songs for Kids Like Us," Pickleberry Pie board member, artist, and composer, Robbie Schaefer of Vienna, is also part of nationally-known band "Eddie from Ohio."

Carol Leon of Burke, Pickleberry Pie performer and music instructor, busies herself in a myriad of musical activities, but calls her visits to the pediatric wards of Inova and Georgetown more than just "shows."

"Irene Light does all she can to make a positive difference in the lives of children," said Leon. "As an experienced music educator who has devoted her life to teaching children, she is just the right person to help performers reach out to children who are hospitalized.

"I am grateful that Irene and Pickleberry Pie offered me the opportunity to discover how fulfilling it is to bring smiles to pediatric ward patients through my music."

THE HOSPITAL SHOWS run about 45 minutes, but the musicians, like Schaefer, Leon and Bruce Anderson, also do bedside performances for children in isolation or any children not able to leave their rooms.

As someone who always wanted to be a music therapist, Light immerses herself in practice and in theory. She reads books and articles on music therapy, its strategies and techniques. Music, Light says, is the easiest way to teach children to listen.

"I once had an autistic toddler as a piano student," Light said. "Her parents were looking for ways to â€˜reach her.â€™ I created tactics for teaching her, and it made me so happy that she reacted acutely to her music lessons."

Light has been teaching music in Vienna since moving here 28 years ago. She still gives piano lessons out of her home, and, in 2005, garnered a readersâ€™ choice award in the area of music instruction in a Best of Families magazine feature. When teaching music to preschoolers, Light used props, such as puppets, to get and retain the childrenâ€™s attention. Light says she loves working with children and witnessing the results of her efforts, whether it is in private lessons or a hospital environment.

"Music reaches children," said Pastor Ray Brill of Wesley. "When you reach children at their most vulnerable, when they are very sick, music lifts their spirits. The healing power of music is universal; it means hope and someone cares. We want to continue our relationship with Pickleberry Pie. Robbie [Schaefer] is great."

PICKLEBERRY PIE offers its services free and receives funding from grants and fund raisers. The Washington Forrest Foundation gave Lightâ€™s group a grant, and Light is looking for a business partnership to sponsor some of their performances. She notes with gratitude the support and cooperation that Bruce Anderson of Jordan Kitts Music has given the D.C.-area Pickleberry Pie.

Scholastic Books donated 200 books to Lightâ€™s local Pickleberry Pie effort in 2006. The books were distributed by Pickleberry Pie during the December 2006 holiday season to children at Inova Fairfax Hospital for Children and Georgetown University Pediatrics Wards.

"So many performers have told me, â€˜Iâ€™ve always wanted to give a show at a hospital, but didnâ€™t know where to begin.â€™ Pickleberry Pie is the link. Thereâ€™s so much more I want to do for the children."