The St. Stephen’s & St. Agnes baseball team is still undefeated thanks in large part to giving up only 24 runs in nine games — 2.7 runs per game. 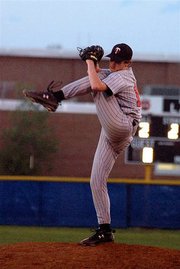 Aside two straight early season one-run wins, — including a 2-1 win over bitter Alexandria rival Bishop Ireton on March 15 — the Saints really haven’t even been tested.

After wins over Avalon, Ireton, Riverdale Baptist and Forest Park, SSSAS went to the Cocoa Beach Baseball Expo in Florida.

There, the Saints registered wins over teams from Pennsylvania, Wisconsin, Connecticut and Kentucky. They then went to Episcopal, an IAC rival and embarrassed the Maroon with a convincing 13-2 win.

McGuiness is the pitching ace and will play at Emory University next season, while the defensive-minded Barnard plans to play at the University of Rochester next season.

In the nine victories, the Saints are outscoring their opponents 90-24, and while SSSAS is the only IAC team still undefeated, perennial IAC power St. Albans is 11-2.

Titan senior right-hander Lee Tackett relinquished a run in both the first and second innings, but eventually calmed down to throw five innings for the win.

The Lancers, who had already doubled their win total from 2007, were coming off a 5-1 victory over Hayfield on Friday when ace Ryan Davis threw a no-hitter and had 11 strikeouts.

Lee pulled to within three runs in the fifth inning, before a combination of a four-run sixth, Alexander relieving Tackett in the sixth and sophomore Matt Kilby capping the seventh gave the Titans the district win.