Getting To Know …
Votes 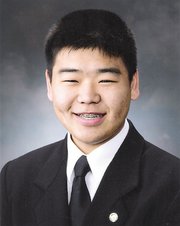 The son of Teresa and Jang Lee was one of two high school reps from the Commonwealth of Virginia and 98 nationally chosen to attend. Lee went to Boys State at Liberty University in June.

"IT WAS definitely a great experience," said Lee. "Everybody got along really great. We really bonded throughout the weekend."

A highlight was going to the White House and meeting with President Bush. "He seemed like a fun person," said Lee. "He acted very fun and youthful."

During the week, Lee wrote a bill on expanding the Meth Project to the 15 most Meth-abusive states. He also established the Fallen American Remembrance Commission, a counterpart to the Memorials for Armed Services for Veterans. He was appointed parliamentarian for the Nationalist Party, and ran for vice president but lost by three votes. He was also appointed ambassador to South Korea.

The weeklong Boys Nation program introduces students to the structure of the federal government while combining lectures and forums with visits to federal agencies, institutions, memorials and historic spots in Washington, D.C.

His favorite part was meeting the other teens, and having discussions about "anything on the political spectrum."

Lee is a rising senior at Fairfax High School where he will be the co-editor in chief for the school newspaper, The Rebel Roar.

HE BECAME interested in politics by working as a page for Virginia Sen. Jim Webb (D) last year and attending Page School. There, he would sit on the Senate floor and watch debates.

After that experience, he says, he does not want to be a senator. "The legislative branch in general is completely out of touch with the American people," he said. "For me, in that sense, I lost a lot of hope in our legislative branch."

For college, Lee wants to attend either Williams College or Dartmouth, where he will pursue political science, international relations or English. He plans to work in the Peace Corps upon graduation.