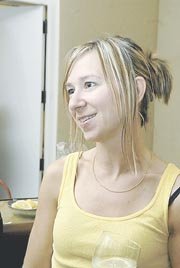 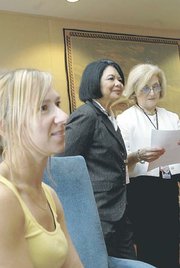 Camille Beers of Reston listens as Carmen Stull, vice president for development, Women’s Committee for the NSO and co-chair of the event with Dolores Potosnak describes the plans for this years designer show. Next to Carmen is Angela Gainey, design chair of the celebration.

Beyond Dragons — an east-west fusion of interior design, presented by the Women’s Committee for the National Symphony Orchestra — was announced last week at a luncheon at the Kennedy Center. The design show will be held this year at the Chevy Chase Women’s Club on Oct. 22-26. Ten local designers will be featured. Feng Shui, table settings, Ikebana and window treatments are some of the workshops and demonstrations already scheduled for the five-day show. The Embassy of Japan is tentatively planning a Tea Ceremony.

In addition to the Women’s Committee and the designers; members of the ASEAN Women's Circle are participating with this year’s show. This non-profit organization is composed of wives of ASEAN ambassadors and diplomats, and female diplomats from the 10 ASEAN (Association of Southeast Asian Nations) embassies. The 10 ASEAN nations are: Brunei, Cambodia, Indonesia, Laos, Malaysia, Myanmar, Philippines, Singapore, Thailand, and Vietnam.