Legal Thriller Ends In A Noose

A local lawyer’s first novel centers on the trial and execution of Saddam Hussein. 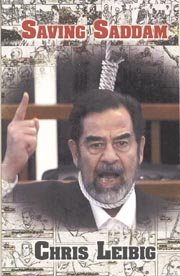 &lt;b&gt;THE TUMULTUOUS&lt;/b&gt; trial and chaotic execution of Saddam Hussein were so surreal that, at times, they seemed to be chapters straight out of a novel.

&lt;p&gt;So it should come as no surprise that Chris Leibig, an attorney with an Alexandria-based law firm, has written a new legal thriller set in Hussein’s murky final days.

&lt;p&gt;Leibig’s novel, “Saving Saddam,” follows the life of Malcolm X Heinlein, a public defender in his mid-30’s who is chosen to represent one of Hussein’s former body doubles.

&lt;p&gt;Heinlein meets with Ayesha Qaddafi, the lawyer and daughter of Libyan dictator Muammar Qaddafi who was to have represented Hussein, and uncovers a political controversy that eventually leads him to risk his own life for his client.

&lt;p&gt;Leibig, who lives in Arlington and was a former public defender in Arlington County, spoke in an interview about how he came up with the idea for the book and how the writing of the book influenced his opinion of the former Iraqi dictator.

&lt;p&gt;I’m always looking for some idea that might be interesting to people for a novel. But what I first noticed about it was that I thought was fascinating when I heard that Ayesha Qaddafi was going to be one of his lawyers, which ended up not happening. So I just started practicing writing a story about that because I thought that was just totally bizarre. Then after that I turned it into something else. That was the first thing where I thought that this trial in Baghdad is going to be something completely strange. Although in the end, it really hardly got any attention at all.

&lt;p&gt;&lt;b&gt;Has your opinion of the whole series of events surrounding his trial changed as a result of writing this book?&lt;/b&gt;

&lt;p&gt;No. It’s just a novel so everything in it is made up. I learned more about it from writing it but my opinion probably would have been the same. I have no major opinion on it. Obviously, he was guilty of atrocities and deserved to be punished. Nothing about the book calls that into doubt. It was just a topic that seemed like it could make an interesting current events novel.

&lt;p&gt;&lt;b&gt;Are you concerned that people might see the book and take the title – “Saving Saddam” – as meaning that you’re sympathetic towards him?&lt;/b&gt;

&lt;p&gt;If you read it you can see that it’s not. But somebody might think that by reading the title.

&lt;p&gt;&lt;b&gt;What is the overall message of your book? What does your book say about U.S. involvement in Iraq?&lt;/b&gt;

&lt;p&gt;I’d say there’s not really an overriding message. It’s really a legal thriller about a trial that happens to be that trial. There’s not a political message in it. I just hope people would think it was interesting.

&lt;p&gt;I’ve been trying to write books for a while. I thought of the idea in 2006 when the Saddam Hussein trial was going on and it was starting to get really strange … I just started working on it and then I got busy with work so I abandoned it for six months or more. When the trial ended and they had that whole video with the hanging that was so bizarre, an editor that was helping me suggested that I pick it up again. So I spent a month trying to crank it out and finished it in March of 2007.

&lt;p&gt;It probably took me three months when I first started it. Then I stopped and picked it up again and then probably another two months.

&lt;p&gt;I’d written a novel before but nothing every happened with it. I still have it. I wrote it in 2004.

&lt;p&gt;The topic of the first book is about a group of kids who get in trouble and get put on trial for murder when they’re in high school. One of the kids winds up being a lawyer and has to do a case in the exact same courtroom where he had previously been on trial.

&lt;p&gt;&lt;b&gt;How much of [“Saving Saddam”] is autobiographical? How much of Malcolm X Heinlein is based on you?&lt;/b&gt;

&lt;p&gt;Really, it’s not based on me. To be honest, I was a public defender once. So you take some knowledge from that. Anybody that’s trying to write one of their first novels, it’s hard not to make it about the topic you know about. But the character is not me.

&lt;p&gt;I’ve never done that. It’s something that comes up occasionally but that’s just made up. The idea of having a sentencing hearing where you don’t have much to argue really happens. But that little incident is made up.

&lt;p&gt;&lt;b&gt;How much of your experience as a public defender informs your writing?&lt;/b&gt;

&lt;p&gt;The two novels I’ve tried to write, and I’m working on another one, all involve that sort of thing. So probably a lot.

&lt;p&gt;&lt;b&gt;What was that like, having to defend a lot of these clients who you knew were guilty but you still had to argue their case?&lt;/b&gt;

&lt;p&gt;Being a public defender is really the most honorable thing you can do as a lawyer. Those people really need a good defense. The system is really a lot better when there are good public defenders. It’s something that I think most people who do that job are really proud of. It’s not something they’re doing just to get a paycheck.

&lt;p&gt;&lt;b&gt;Do you ever watch any of those legal shows on TV? Do you think they’re accurate? I’m thinking Law & Order or something like that.&lt;/b&gt;

&lt;p&gt;I don’t watch that many of them but they’re all really well done. Some of the scenarios are pretty realistic. But really they’re just for fun.