Land of the Inflatables
Votes

Land of the Inflatables 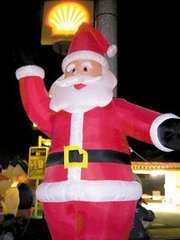 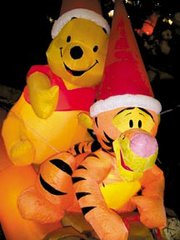 Winnie the Pooh and Tigger, too. 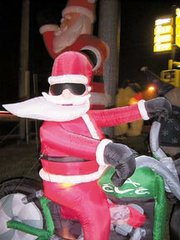 It used to be "Deck the halls," now it's "Inflate the

Fairfax City, has been adding to the inflatables that decorate his

Sugarland Shell station at Dranesville Road and Route 7, near the

Loudoun County line. With a week to go before Christmas, he has a complete village of Santas, Grinches, Pandas, Snowmen and trains — all powered by air and motors. And every year he does something different.

ourselves apart," he said. And because all the wind and rain wreaks havoc on the plastic critters, it's a lot of work. He has one employee who spends 80 percent of his time inflating and deflating them, tethering them, sandbagging them, straightening and checking for rips and tears and replacing burned out motors.

But the payoff is worth it, especially when children stop by to admire them.

"I started out doing it for all the kids in the neighborhood," he

said. "When you see kids out there it's kind of neat. We have a lot of people who come up here and take pictures of their kids with them."

Beaulieu said 18 inflatables inhabit his Sugarland Shell and another 60 are at the Jermantown Shell. Each year he adds more. And not just the Christmas variety. He has bears and hearts for Valentine's Day and turkeys for Thanksgiving. They cost anywhere between $9 and $180 and he'll travel as far as Winchester to find a bargain. Now he says people actually call him to say they found such and such at the Home Depot, Walmart, Sears or Price Club, but he waits until they go on sale.

Beaulieu been in business for 29 years and once had four gas stations, but sold two.