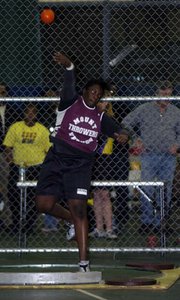 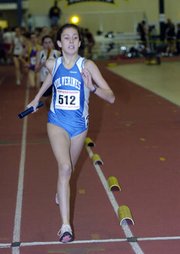 But a strained back prevented Heath, a University of South Carolina recruit, from once again pushing her body to the limit. She, instead, elected to rest for this weekend’s upcoming state meet. She did run the second leg of West Potomac’s winning 800-meter relay, and helped the Wolverines grab fifth at the Northern Region track meet held at George Mason University over the weekend.

“(Winning the relay) definitely gave us momentum heading into the rest of the day,” said Heath, who was involved in a minor car accident during the previous week.

Lake Braddock swept the boys and girls regional titles in a meet which was dominated by the Patriot District. The T.C. Williams girls and boys finished second and fifth respectively, while West Springfield’s girls sprinted to a fourth-place finish. West Potomac beat T.C. Williams and West Springfield in the district meet, getting runner-up finishes for the boys and girls.

Kat Lee was the top point getter for West Potomac, scoring in a team-high six events. The senior finished second in the long jump, third in the pole vault and triple jump, while also grabbing a sixth in the 300-meter dash (42.81 seconds).

She also ran the opening leg on the 200-meter relay, which finished seventh.

Lee failed to get a district title, getting runner-up finishes in the long jump, triple jump, pole vault and 300-meter dash in the Patriot District meet. She finished third in the 55-meter hurdles.

Sophomore Kelsey Rosenberg, who made the all-region cross country team, finished eighth in the 1,000-meter run, finishing in 3:09.84. Kaitlyn Anderson finished sixth in the pole vault. Besides winning the 800-meter relay, the Wolverine girls finished 11th in the 400-meter relay.

Other than Lee, Heath remains the likely top finisher for the upcoming state meet. She finished eighth in the 3,200-meter run last season and helped the Wolverines to a fourth in the 800-meter relay.

Majors sophomore Ebonee Davis finished 18th, missing her season-best toss by almost two feet. The only other Mount Vernon individual participant was Hylene Valdez, who placed 14th in the 1,600-meter run. The Majors finished fifth in the district meet.

&lt;b&gt;ON THE BOYS&lt;/b&gt; side, West Potomac advanced to the state meet with a third in the 200-meter relay, and finished sixth in the 400-meter relay and seventh in the 800-meter relay.

Kelly Carmichael, who finished 21st in the 1,600 meters at states last season, was the top individual, grabbing a sixth at regionals.

Mount Vernon’s top finisher was Brian Gates, who placed fourth in the triple jump and sixth in the 55-meter hurdles. Cameron Clive tallied an eighth in the 55 meters and 12th in the long jump, while four other Majors garnered top-20 finishes.

The Majors, who finished a distant second behind Edison in the district meet, failed to have a boys state qualifier for the second year in a row.