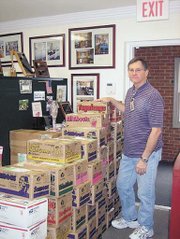 Mailman Carl Downing picks up packages for troops serving in Iraq and Afghanistan on Monday in Great Falls.

The phone call came in before 8 o’clock on Saturday morning from an undisclosed location in Iraq.

"Ma’am, we have a case of Girl Scout cookies here that you mailed to an individual who has been sent back stateside with no forwarding address. I was just wondering, what would you like us to do with the package?"

Sharon Rainey, founder of the Neighbors International Foundation (NIF) replied without hesitation, "I want you to open the packaged and enjoy the contents to the fullest extent."

"Yes ma’am, I think we can do that for you!" replied the mail clerk.

When Rainey asked what else they needed, the woman on the other end hesitated for a moment and then said, "Well, ma’am, we really appreciate anything and everything you all send. We are truly grateful for everything. But if you can, would you send us some Samoas? We could really use some Samoa cookies!"

Just an hour later, a dozen volunteers showed up at the NIF office in Great Falls to ready another 85 cases of Girl Scout cookies for mailing to military personnel serving in Iraq and Afghanistan.

Catherine Griffin, NIF’s volunteer coordinator, has developed a system that now allows hundreds of packages to be readied at least once a month.

"Our only cog in the wheel is postage," said Griffin. "If we don’t have donations for postage, then the packages sit here in the office until we have enough money."

Griffin said, "We have enough for this batch to go out, but after that, we are on hold until we get more donations."

Rainey said, "The local community has been incredibly generous in their donations. Most of the cookie donations come from troops in McLean and Great Falls, though many other geographical regions have donated as well. Last year, Girl Scout troops from Arlington to Leesburg to Manassas donated over 7000 boxes of cookies. We also had troops from Maryland donate. We expect that number to increase this year. But we rely on individuals for the money to get the packages there.

"We could sure use some corporate sponsors," said Rainey. "We have been blessed by many individuals and their generosity, but they can only give so much."

Two months ago, Carolyn Stys told her husband that for her birthday, she didn’t want another pair of earrings. Instead, she asked him to match any donations that their friends made to NIF. She put the word out to her friends, and her husband wrote a check for over $800 a week later.

"We don’t get that very often!" said Rainey. "Most of our care packages cost about $10 to ship, but the cookies are more because of their size and weight."

Neighbors International Foundation started in late 2004 when one of the local residents, Norah Geraghty, was in the post office mailing a care package to her son, Brendan, who was serving in Afghanistan.

"I thought it would be cool if he could get a package from his hometown to let him know that many of us were thinking of him and appreciative of his sacrifices," Rainey said. "I had no idea it would grow to this size."

In 2005, Great Falls resident Laura Jameson and her mom, Janet, collected Girl Scout cookies to be donated to the troops. The effort was limited, but successful. In 2006, Great Falls resident Pam Gilbert and her daughter, Natalie, met with Rainey to explore the idea of including NIF in the Girl Scout Gift of Caring program. The relationship has been a successful one ever since.

The USPS recently announced that postage rates will again rise effective May of this year.

"We’ll just try to get as many packages out as we can before the rates go up again," said Griffin.