Nadiaye Coleman pauses to take a call while she touches up the paint inside her cardboard house. 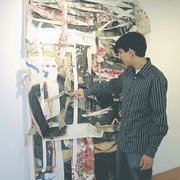 Arvand Moein discusses the process behind his work, “One Year of Painting.” 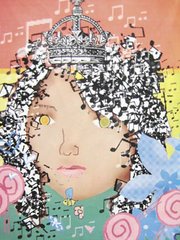 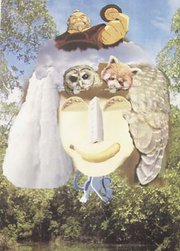 Arvand Moein’s piece of art is three times as wide as he is and nearly twice as tall. Nadiaye Coleman can literally fit inside her work. Arvand’s wooden frame is covered in shredded canvas, strips of work he completed for last year’s art class. Nadiaye is finishing painting a corner inside a cardboard box cut into the shape of a house, complete with a chimney. The computer graphics work submitted by Wendy Valverde Viana and Ben Cohn is less physically imposing – both are on sheets of paper – but pack just as much imaginative punch; Wendy’s hair is a sheath of music notes, and on Ben’s self portrait, his nose is a Wii controller.

Arvand and Nadiaye are seniors at South Lakes High School, Wendy and Ben are eighth graders at Langston Hughes Middle School, and along with several of their classmates, they are featured artists at the Greater Reston Arts Center’s student show, which this year welcomes work from Reston and Herndon middle and high school students within the theme of self portraiture.

“This is the first year that we’ve ever done it as a thematic exhibition,” GRACE exhibitions director Joanne Bauer said. School artwork has been featured in the past, and the submissions suggested the theme: “I realized how much self portraiture there was.”

BEN AND WENDY, both students of Arline Liu at Langston Hughes, worked on their self portraits as a class assignment. “The idea of the project was to do a self portrait and add things that represent you,” Wendy said. “I really love music and I always have a song in my head,” she said, explaining her art. “The background is red, yellow, and green – the colors of my flag, Bolivian. It also has a lot of candy because I really like candy.”

Ben’s self portrait is a collage of his favorite things, from the tacos that serve as his eyes to his favorite animals, an animal and a red panda, “and my eyebrows are actually made of fencing swords,” he said. “I had been searching for the images for a while, they’re just all sort of reflections of the things that I like,” Ben added. “It’s bits and pieces of everything.”

The bits and pieces in Arvand’s canvas work, titled “One Year of Painting,” are a little more literal. To make the piece, Arvand tore last year’s canvas paintings into strips. “They weren’t really successful,” the senior explained. They were more traditional canvas paintings: “this year I’ve been diverging a lot more from that.” Arvand has become more concerned with demonstrating the process of making art in his pieces. Each individual piece of shredded canvas is readily identifiable, each comes from one of five or six original paintings. Arvand also wants viewers to notice the metal screws holding the pieces in place; he used at least 50 – “I wouldn’t be surprised if it was more than that,” he said – and the point of each one can be seen if one walks behind the piece.

Arvand said that when he is working he does start out with an idea of what the final piece will look like, but he’s not afraid of revision. “Planning was a lot more important last year,” he said. “One Year of Painting” underwent some changes in the process: “As I got into it I noticed how the shredded canvas reacted to me, how it shriveled up,” Arvand said. “It deviated from my original plan.”

While talking about the work, Arvand walked up to it and touched a few pieces of the canvas – loose strips and tight spirals. He said he worked on the project for about a month and a half. “I can almost relate to the memories I had making it,” he said.

Nadiaye’s art is more directly concerned with memory. Her family recently moved to Reston, and after a larger home, they are currently living in a condo. The situation inspired Nadiaye, also a senior, to create her own space, a house cut from a cardboard box. Both the inside and outside are covered with acrylic and tempera paint. The outside is an abstract collection of color, but inside Nadiaye has a landscape painted on the wall, and more green, her favorite color: “Everything I love is inside,” she said. She knew what she wanted to put inside the house, and finding the right balance of what to display on the outside – open to anyone’s eyes – went a bit slower. “The outside took longer than the inside.”

The swirling colors, never quite the same shade in two places, represent memories, with the good and bad mixed together, she explained. To find the right palette, she studied brightly colored jungle animals, particularly frogs and birds – she loves parrots, she said. Before working on the piece, which is self-titled, Nadiaye was looking forward to making a dollhouse, when the idea of this piece – a miniature house for her – interrupted. “It turned out better than the dollhouse I wanted.”

THE STUDENTS’ EXHIBIT, “Emerging Visions: Adolescent Self-Portraiture” runs Feb. 29 through March 28 at GRACE, 10010 Market St., in Reston Town Center. There will be an opening reception Friday, Feb. 29, 6-8 p.m. An iArt teen night, with live music, pizza, and hat-making supplies for visitors to create wearable, artistic self-expressions, is scheduled for Thursday, March 6, 6:30-8:30 p.m. All the student artists are looking forward to sharing their art with the public. Arvand hopes to get a lot of questions about his artistic process. Ben thinks people will be struck by the strangeness of his collection: “I assume most people are going to think, ‘wow that guy is weird,’ which is probably pretty close,” he said. Wendy, however, seems to speak for most of the teen artists, whose self portraits will be on display: she wants viewers to see her through her art. “I hope they can feel how I am, how I feel – that it has significance.”