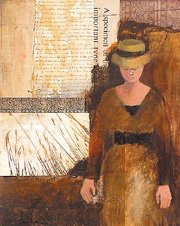 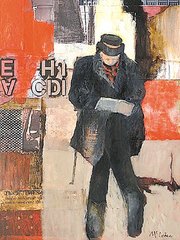 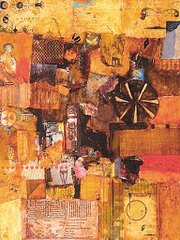 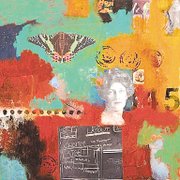 After a hiatus of 12 years, Joyce McCarten returned to her first love — painting. Tonight, June 12, her work will be featured during a reception and award ceremony in the Torpedo Factory Art Center's Target Gallery from 6 p.m. to 8 p.m. McCarten is the 2008 Torpedo Factory Artist of the Year.

As part of the Friends of the Torpedo Factory Art Center's annual programming, competition for the annual honor is open to Torpedo Factory Artists Association members only. In addition to the month-long, Target Gallery solo exhibition, the award includes a monetary prize. McCarten's show opened June 11 and will run through July 13.

An award winning artist whose works are part of private and public collections not only throughout the United States but also in Europe and South Africa, McCarten teaches art classes at the Art League School and in her private Falls Church home studio.

Her original painting career started in 1971 when she took classes from Evelyn Turner, an early Torpedo Factory artist. Since ending her hiatus, she has been painting since 1988.

"I knew I had to study. Painting is not easy. You have to have a lot of patience. In fact, one of my teachers said that one of my greatest qualities was my patience," McCarten said sitting in the Target Gallery among the painting now on display.

In addition to the Art League, McCarten has studied painting at NOVA, George Mason, and the Corcoran Gallery. She started by taking classes in oil painting and doing a lot of drawing. Now she specialized in mixed media based in either oil or acrylic.

"I had a career in publishing and painted just at night. But, then I realized that the art was too demanding to combine with my career so I stopped painting altogether for 12 years," she said. Her first husband, who died unexpectedly five years ago, was a graphic artist and painter.

Now married to a stage, screen, and television actor, Walter Smith, they reside in Falls Church. Her two grown daughters are also into the arts. Michele is a musician in the Washington area and Melissa is a dancer living in Philadelphia. "A love of the arts runs throughout the family," she said.

BUT, HER IMMERSION into social commentary and involvement is not limited to her canvas. Although some of her art work speaks to her most recent venture into another element of teaching — that of English as a second language to recent immigrants.

She began her ESL teaching at The Falls Church in Falls Church just last year. "We have people from all over the world in the class who are to become citizens. It's amazing when you really get to know them one on one you see a common thread — the dream of becoming an American citizen," McCarten said.

That thread has inspired a new series of McCarten's paintings entitled "The American Dream." Reflecting on that personal interaction with her students she said, "They want a better life and a better education for their children. It's in their eyes, the way they almost seem to be looking into the future."

Several of her works in the solo show catches that dream very poignantly. But, not in a lighthearted or dream chaser way, rather in a very realistic manner, conveying almost contemplative fixation — from a man reading with a book to a woman who commands a sense of presence and purpose.

McCarten works an array of images into her paintings, whether the medium is oil or acrylic. There is a piece of circular metal from the garage that resembles a filter, a scrap of paper with analytical notations, the head of a woman with a 1920's hair style, a piece of corrugated cardboard, a post mark, and a curvaceous torso.

Elements of her work are like an artistic scavenger hunt daring the viewer to find a common thread in order to solve the intertwined puzzle. Even the format seems to be part of the challenge whether it be canvas, wood or paper.

"I like to mix it up a lot. I want it to be quite challenging. I like layers. I like to use abstract shapes, colors, images and change the medium," McCarten said. Each piece on display seems to embody the exhibition theme — "Don't Postpone Joy."

Two of her favorite works are "Innocence Lost" and "Yaking In The Wilderness." The first draws the viewer's attention to two dominate images that seem in juxtaposition to one another— the head of the woman with a 1920's hairdo and a piece of black paper with white analytical notations. They are joined by the image of a butterfly and an "all seeing" eye.

To the female image McCarten has added lipstick and rouge. "In our culture today we have lost the ability to blush. It seems we have lost the innocence. That's why I added the lipstick to her lips and the rouge to her cheeks," she explained.

"Yaking In The Wilderness" is based on a quote from the late American writer S.J. Perelman. A large, very busy painting, it presents a silent commentary on "how much we deal with in this life that, in the final analysis, is not very important," McCarten explained.

One very noticeable characteristic to her work is the abundant use of yellow mixed with wheat and earth tones. It plays either a major or minor role in many of her works. Perhaps that is because, by the artist's own admission, "I love painting grain fields. During a trip through the west and midwest I sketched many wheat fields," she said.

Perhaps one of the most intriguing aspects of her work is that even within her most abstract there are elements of the here and now that reach out to the viewer with a dualism rarely so tangible. Even "Yaking In The Wilderness" makes one long for some of that "yaking" in this era of computer "no speak."

Looking forward to her solo exhibition McCarten admitted to being "a little nervous" and very surprised and honored at being chosen Artist of the Year. "Having your work out there in a solo exhibition makes you very vulnerable. I was also surprised by being chosen because the two semi-finalists are friends of mine and very good artists," McCarten said.

This is an exhibition that is well worth any Torpedo Factory visitor's time and contemplation. McCarten's works range in price from $350 to $2,500. Beginning in July visitors will find her in Studio 301 at the Art Center, which she has sublet.

Target Gallery's solo exhibition of her work is free and open to the public. For additional information contact Mary Cook, director, Target Gallery at 703-838-4564, Ext.4 or by logging onto www.mcook@torpedofactory.org. The Torpedo Factory Art Center is located on Alexandria's waterfront at 105 N. Union St.