A Story With A Happy Ending
Votes

A Story With A Happy Ending

Parents write a story about their daughter’s battle with Leukemia.

Dani Shotel has returned to her Jamestown Elementary School classroom after a battle with cancer. 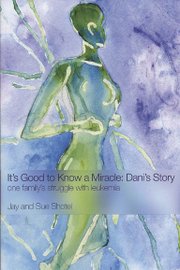 Jay and Sue Shotel's new book, "It's Good To Know A Miracle," is about their daughter, Dani.

&lt;p&gt;Greene, a graduate of Wooton High School in Rockville, Md., needed the transplant after she was diagnosed with Acute Myelogenous Leukemia, the disease that pushed her to the brink of death and completely altered her life.

&lt;p&gt;She is back in the classroom teaching special-ed preschoolers at Jamestown Elementary School and is thriving in her post-cancer life. But this experience has required some explaining for her pupils.

&lt;p&gt;“We just celebrated my five-year anniversary,” Greene recalled, “And all the parents had their children make me birthday cards. All these birthday cards said “Happy 5th Birthday!” So one of my students said to me the other day ‘How old are you?’ And I said ‘I’m 31.’ And he goes ‘No, you’re five. Your birthday was in February.’ And I said, ‘No, I have two birthdays.’”

&lt;p&gt;&lt;strong&gt;FROM THE MOMENT&lt;/strong&gt; Greene was diagnosed with leukemia, her parents, who acted as her primary caregivers, supported her in every imaginable way.

&lt;p&gt;They also took meticulous notes. Sue Shotel, a retired teacher and administrator in Montgomery County Public Schools, said that her career in education trained her to be a lifelong note taker. When her daughter became ill, she and her husband became walking stenographers, documenting every step of Greene’s struggle with and eventual triumph over the disease.

&lt;p&gt;Now, the Shotels have taken those notes and turned them into a book documenting their story, entitled “It’s Good To Know A Miracle; Dani’s Story: One Family’s Struggle With Leukemia.”

&lt;p&gt;Jay Shotel, an education professor at George Washington University, said that the book was written “with other folks in mind who might be going through the same thing… It speaks not from a medical perspective but from the perspective of another human being.”

&lt;p&gt;&lt;strong&gt;“IT’S GOOD&lt;/strong&gt; To Know A Miracle” gives a day-by-day account of the Shotel family’s experience, from the 2002 diagnosis through the aftermath of the chemotherapy and the marrow transplant and ending with Greene’s 2005 wedding to longtime companion Scott Greene.

&lt;p&gt;One of the areas that the book focuses on is the importance of the emotional health of someone who is battling a serious illness.

&lt;p&gt;“We didn’t ever, in front of Dani, think anything but positive,” Sue Shotel recalled. “We had a couple moments where we were really sad. But there were no tears in [her] room… She was so protected. She was literally surrounded by love.”

&lt;p&gt;The book also details how the family came into contact with Thomas Heimhuber, the German man who donated the bone marrow that saved Greene’s life.

&lt;p&gt;Heimhuber’s marrow came up as a match with Greene’s in an international database. But due to privacy laws, the Shotels were not allowed to contact him until several years after the transplant.

Greene finally got in touch with him a few months before her wedding and invited him to come. Much to her suprise, he accepted the invitation. The first time they met was 30 minutes before the rehearsal dinner.

&lt;p&gt;“He came out [of the terminal] and it was like ‘This is the person that saved my life,” Greene said. “This stranger…”

&lt;p&gt;She added that “At the wedding he was the most popular person. People would come up to me and say ‘Congratulations! Where’s Tom?’”

&lt;p&gt;&lt;strong&gt;THE SHOTELS&lt;/strong&gt; said that the process of writing the book was a good chance for them to air their emotions about the experience.

&lt;p&gt;“We’re a very close family,” Sue Shotel said, “But a lot of all of our feelings during this entire process were repressed because we were just fighting.” “We were just focused on the goal,” Greene added.

&lt;p&gt;The Shotels’ advice to any family that is dealing with cancer is to maintain positive thinking, take an active role in your treatment process and, according to Sue Shotel, “Make sure your kid has great health insurance.”

&lt;p&gt;But ultimately, the Shotels’ goal for “It’s Good To Know A Miracle” was to provide the perspective of normal people who dealt with this major illness and came through it. “We’d like to feel people find this a valuable resource,” Jay Shotel said.

&lt;p&gt;According to Greene, at least one person already has.

&lt;p&gt;“One of my good friends works for a large law office in D.C.,” she said. “One of the interns there was recently diagnosed with [leukemia] and she will have to have a bone marrow transplant. I contacted her through her blog and I wrote her a short message… She immediately wrote me back and said ‘I have to talk to you.’ And in my conversation with her she said ‘I really wish you had a story so instead of asking you all these questions then I could just read it.’ And I said ‘Well, guess what…’”