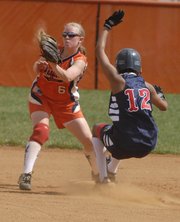 In addition to Marino and Talbot, Hayfield has three other seniors, which includes all-district honorable mention Kelly Press.

&lt;b&gt;Season Ended&lt;/b&gt;: Lost 3-0 to Centreville in the first round of the region tournament.

&lt;b&gt;Outlook&lt;/b&gt;: Last season, the Hayfield softball team had to rally just to earn a spot in the Northern Region tournament. In ousting fourth-seeded Lee in the opening round of the Patriot District, the Hawks amassed some tournament experience in consecutive losses to South County and Centreville.

This year, the route to the region tournament should be far easier nearly the entire team returns for 11th year head coach Ron Giovannucci. Though the Hawks had five seniors last year, none played a major role. Instead, first baseman Sarah Marino, catcher Kelsey Talbot and pitching ace Jennifer Windau served as the team leaders. Marino and Talbot were the team’s lone representatives on the first-team all district squad and Windau was a second-team all district selection as a sophomore,

Leadership aside, the Hawks’ hopes for Giovannucci’s second district title in the past 11 seasons may rest with Windau. Switching between a fastball, riseball and an occasional changeup, Windau finished with a 138 strikeouts and a 2.36 earned run average.

“I think she’s one of the top pitchers in the region,” Giovannucci said. “She’s got really good ball placement with a nice drop.”

“They both hit the ball a mile,” Giovannucci said.

“Our biggest key is that we need some offense from the lower end of the batting order,” Giovannucci said.