Mount Vernon sophomore Brittany Leckey is one of three pitchers in the Majors’ arsenal that could threaten Yorktown for the National District supremacy. 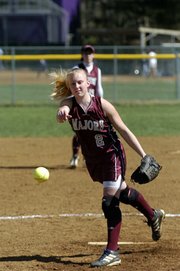 Mount Vernon returns nearly its entire team from a 16-win 2007, but it will have to adjust to new coach John Schneeberger.

&lt;b&gt;Season Ended&lt;/b&gt;: Lost to Madison in the first round of the region tournament

&lt;b&gt;Outlook&lt;/b&gt;: John Schneeberger may be a new coach with a funny name, but he has the Mount Vernon softball on the verge of believing they can topple district heavyweight Yorktown.

Schneeberger comes to the Majors from Lake Braddock and replaces former coach Chris Tippins. Schneeberger is part of a new guard, who may have had to wear nametags at the first district coaches meeting. Mount Vernon joins Yorktown, Edison and Washington-Lee, all of whom are installing new coaches in their respective softball programs.

Schneeberger, unlike Edison and Washington-Lee, at least has a core to build around. Four seniors return, including first-team all-district pitcher Arendi Compton. Compton, now a senior, finished behind Yorktown’s Briana Hanafin in the district voting last season. This season, she’s going to be continually relied upon to notch another 15-win season.

Mount Vernon only graduated three starters from last season, leaving Schneeberger with a wealth of experience and talent.

“ The team has capable pitching and catching,” Schneeberger said. “[The ] key to success will be how well it plays defense.”

“The outfield is among the best in the region,” Schneeberger said.

Other returning all-district performers include junior infielder Samantha Bauer and senior Tracy Carpenter, who will likely play catcher, and will have to team with Bauer to tutor an inexperienced infield.

“The infield has all new faces, but is improving every day,” Schneeberger said.

“This year's team works really hard every day and expects to excel,” Schneeberger said. “They care about each other so they will be able to handle adversity well.”