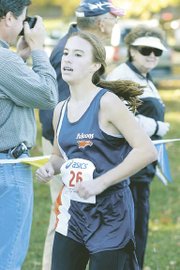 Running well and succeeding on the challenging Oatlands Plantation course is difficult enough for the most talented and seasoned high-school cross country runners. So one can only wonder what such a course would be like for a talented, but lesser experienced long-distance athlete competing in an important postseason race.

Briar Woods freshmen runner Alexa Kniley got a chance to find out last week when she ran in the girls’ race of the Region II cross country championships Oct. 30 in Leesburg. And Kniley was quite impressive as she finished 12th overall — among a field of 90 runners — to earn a top-15 medal. On a picture-perfect autumn afternoon, she timed at 20 minutes, 1.34 seconds on the 5K course.

"I was nervous all day today," Kniley said during the minutes following the race. "It was the third time I’ve run this course this year."

&lt;b&gt;BRIAR WOODS&lt;/b&gt;, during the regular season, participated in events at Oatlands, including the enormous Oatlands Invitational event at midseason. So Kniley had some good race experience and knowledge of the setting.

"It was a hard race," Kniley said of the region run. "The final hill [within the final mile] was hard."

Kniley, who earned a place at this Saturday’s state AA championships meet at Great Meadows in The Plains, said she tries to get out to good starts at races. She did so at the region race and ran strong throughout. She was one of three freshmen runners to place in the top 15.

As a team, the Briar Woods’ girls finished eighth in a field of 12 teams. Brentsville District (Nokesville) was the team champion, followed by second place Millbrook (Leesburg) and third place Potomac Falls of Loudoun County.

The Briar Woods boys’ top finisher at regionals was junior Zach Deaton, who was 32nd overall in a field of 90 runners. The next two Falcons to cross the finish line were senior Billy Calhoun (44th overall) and freshman Connor Pompilio (58th).

Briar Woods, which two weeks ago finished fourth at the Dulles District championships to qualify for regionals, finished 10th overall at the region showcase. The team champion was Dulles rival Potomac Falls.

Jefferson was the team champion, followed by second place Oakton and third place Robinson. Stone Bridge was 14th in the team standings.

Paradis, who two weeks ago finished second overall at the Liberty District championships, will compete at this Saturday’s state AAA championships at Great Meadows