Descendent family of three people buried at the Freedmen's Cemetery gather at the Alexandria Archaeology Museum on Saturday, Nov. 22. More photos at www.alexandriagazette.com. 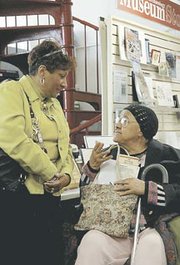 Yvette Lewis talks with her grandmother Charlene Taylor Napper during the visit on Saturday to the Alexandria Archaeology Museum in the Torpedo Factory. 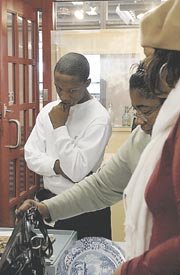 Donnell Braxton is lost in thought at the gathering of the families as some of the women work at the pottery puzzles on the table.

More than 40 members of the Knapper/Taylor family celebrated the lives of their ancestors by looking at historic photos, objects, kinship charts and an oral history interview of Virginia Thomas Knapper conducted by the City's Office of Historic Alexandria in 1982.

It was known that Knapper, who was born in the Alexandria "Cross Canal" neighborhood — 900 block North Fairfax Street — in 1897, was descended from enslaved people who came here during the Civil War. However, a new OHA genealogy project learned that she was the great granddaughter of Arthur W. and Lucy Loomax (Lomax) who were buried in the cemetery at age 60 in 1864 and 1865 and a cousin of 8 month-old Emma Harris, buried in 1866.

Research by Char Bah traced the family's ties back more than five generations to the Civil War. Pictured above is the head of the family, Dorothy Knapper Taylor, Virginia's daughter, and four younger generations. Taylor brought a family heirloom, a glass pig bottle made by her mother at the Old Dominion Glass Factory, now the site of the Crowne Plaza Old Town to share with the City archaeologists.

The interview and photos can be seen at alexandriava.gov/oha-main/oralhistory. The planned Contrabands & Freedmen's Cemetery Memorial will include a wall of names to honor the more than 1,800 people. To date, 26 descendent families of those buried at the cemetery have been identified.