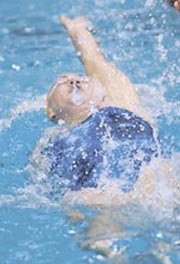 Christiansen, a junior, had a stellar third season for the Cavaliers. At20the NCAA championships, she took fifth place in the 100-backstroke and sixth in the 200-back to earn her first career individual All-American honor. The Reston native also took part in the All-America 400 medley relay race — in which the Cavaliers finished sixth — and she was part of three Honorable Mention, All-American relay teams (200-free, 400-free, 200-medley).

Prior to NCAA’s, Christensen had a dominating showing at the ACC Championships, where she set new league standards in the 100-back (51.79) and 200-back (1:52.22) events, as well as the 200-free, 400-free, 200-medley and 400- medley relays. During the season, she twice earned ACC Performer of the Week and was named CollegeSwimming.com National Swimmer of the Week on Nov. 19.