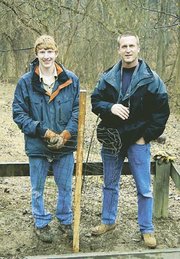 The women show off their skills.

Stephen Sondheim’s musical, which tells the story of the reunion of former stars and chorus girls in a soon-to-be-demolished theater where a series of "Follies" had been staged in the 1920s and 30s, is a massive undertaking for any theater company. That hasn’t kept The Arlington Players from taking on the challenge – twice. They tried it in 1988, and according to those who saw (or participated in) that production, it was a smashing success. It is hard to believe, however, that it could have been better than the one they are staging now under the steady hand of director Christopher Dykton.

Consider the statistics. When the nearly three-hour show comes to an end, there are no fewer than 45 performers taking the stage for their final bow. In the pit there are 25 instrumentalists still playing the curtain call and exit music even though they have already provided spirited support for two dozen songs ranging from huge dance numbers to searing torch songs and up tempo comedy routines. The huge stage has been transformed from the ruin of an old theater to the glamour of its glory days and back again, and who knows how many costumes have been paraded before the audience’s view?

The bulk of the dramatic weight of the show falls on the shoulders of two couples and Dykton has four very good performers in those roles. Their characters had been paired back in their youths, the women being members of the chorus line of the fictional "Weisman Follies" and the men two "stage door Jonnies" who would wait for them backstage and take them out on the town after the final curtain.

Jean Cantrell is the former chorine who always regretted her decision as to which of two of the "boys downstairs" she chose to marry those many years ago. She is wistful in "In Buddy’s Eyes" but is most impressive in her second act torch song, "Losing My Mind" which she stands center stage to deliver with pure vocal power and without so much as raising her hands from her side so as not to distract from the power of the song and the scene.

Lynn Audrey Neal is the other former show girl, the one who did marry the boy Cantrell’s character feels got away. She’s glamorous and stylishly sophisticated, but when emotions break out, watch out! She tears up the blast-of-anger song "Could I Leave You?" and leads an all out release for "The Story of Lucy and Jessie."

The men in this mismatched couple of couples are a wiry, high energy Jack B. Stein as the one who wants what he can’t have but never appreciates what he does have, and smooth, polished Jimmy Payne with his satisfyingly full voice as the cad who comes totally unglued by the end. Stein’s "The God-Why-Don’t-You-Love-Me Blues" is the first of the four-song string of show-stoppers that cap the second act.

There are individual numbers for other performers that hit the heights as well. Judy Lewis sells the cabaret number "Ah, Paris!," Deborah Davidson belts out "Broadway Baby" and RoseAnn Ashby and Anissa Hartline soar with the operetta tribute number "One More Kiss." The topper of all these highlights, however, is Barbara Porter’s nearly six minutes of ever increasing intensity insisting that "I’m Still Here." Finally, Allison Block, Jennifer Diffell, Juan Rodriquez and Bill Walker provide a refreshing pastiche of classic hoofer routines in Sondheim’s famously intertwined "You’re Gonna Love Tomorrow/Love Will See Us Through."

Leah Kocsis leads the orchestra, which is solid throughout, especially in the reeds and woodwinds that provide so much of the heft of Jonathan Tunick’s famous orchestrations for Sondheim’s challenging score.

Grant Kevin Lane designed what must be at least three shows worth of costumes: the contemporary formal wear of the party-goers at the reunion, the street wear and stage costumes of their former selves and their ghosts, and the opulent outfits for the "show within a show," the final re-imagining of the splendor of the past in a follies number called "Loveland." His designs for the first two categories are fully satisfying, but those for the chorus in the "Loveland" sequence remind the audience that this is, after all, a local production without unlimited resources. Huge resources, yes. But not unlimited.

&lt;i&gt;Brad Hathaway reviews theater in Virginia, Washington and Maryland as well as Broadway, and edits Potomac Stages, (www.PotomacStages.com). He can be reached at Brad@PotomacStages.com. &lt;/i&gt;