Reunion for a Reunion Musical
Votes

Reunion for a Reunion Musical 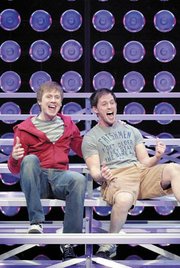 There was a very unusual celebration at Signature Theatre in Shirlington on Monday night. Two young men who wrote a musical and the four young men who played in that musical took the stage for a one-night-only concert to celebrate something that had never happened before: the release of an original Broadway cast album of a musical that started right here in Arlington.

"Glory Days" had its premiere here in January of last year. It was an unusual project to begin with, but few could have predicted that it would become the first musical that premiered in Arlington to transfer to Broadway, even if the reception there wasn’t quite as positive as everyone would have hoped. The opening night at Signature Theatre was met with unbounded optimism. The opening night on Broadway five months later was also the closing night on Broadway.

The musical was the work of two Montgomery County lads who played some of the music from their project for Signature’s Artistic Director Eric Schaeffer when they were 20 years old and attending the Musical Theatre Institute he teaches at The Kennedy Center every year. He liked what he heard and agreed to work with them to develop the musical.

It told a simple story of a reunion of four buddies from high school on the first anniversary of their graduation. After being inseparable during high school, they have had a year of growing up and, it turns out, a year of growing apart. The one-act musical had a pop-rock score of 15 songs ranging from high-spirited to touching as the four brought each other up to date on their lives and reminisced about the highs and lows of their high school careers.

The two who wrote the musical were Nick Blaemire, who had previously appeared in musicals in Washington and Maryland, and James Gardner, who had featured roles in musicals at Signature. Neither, however, appeared in the cast of their musical. Instead, Steven Booth, Andrew C. Call, Adam Halpin and Jesse JP Johnson portrayed the four friends. All had national tour or regional theatre experience.

The six twenty-somethings got back together on the stage at Signature Monday night for a "CD Release Celebration" concert on the occasion of the issuance of a recording of the full score on Sh-K-Boom’s Ghostlight Records label. Blaemire and Gardner told some of the story of the development of the show and then Booth, Call, Halpin and Johnson responded to questions about their experiences from the first auditions through the brief run on Broadway (the show had two weeks of previews before its one-night run at the Circle in the Square Theatre in the same building as the Gerswhin Theatre where the Broadway production of "Wicked" was in its fifth year as a major hit.

A touching moment in the evening was the appearance of Gardner’s brother Matt who was the assistant director of the show at Signature and on Broadway. He told the story of his first reading of an early version of the script which he found less than impressive. It was just out of loyalty to his brother that he agreed to direct its first tryout reading. He then resisted his brother’s efforts to have him read subsequent drafts for over a year, but when he finally returned to the piece he was moved.

"Glory Days" has already had a post-Broadway life. It was translated into Japanese and opened in Tokyo with a Japanese rock band performing the piece.

Not all musicals that are produced on Broadway get an original Broadway cast recording but those that do often have more productions afterwards because of the exposure the album gets them. People become familiar with the score and are more likely to explore the possibility of a production.