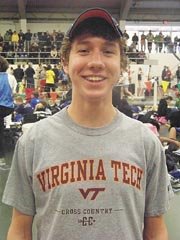 Brett Mandeville, a senior distance runner at South County, broke his own school record in the 3,200-meter run this season, finishing with a time of 9 minutes, 59.11 seconds. 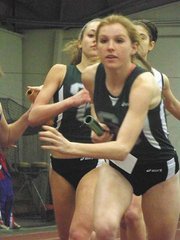 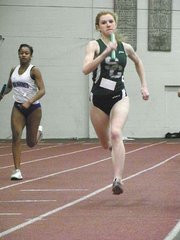 Under second-year coach Greg Rowe, South County’s indoor track and field team has made significant strides. ‘I’m pleased with the progress that the kids have made,’ Rowe said.

Saddled with perhaps the stiffest competition within the Northern Region, the South County indoor track and field program has yet to win a Patriot District title.

Unlike some other sports at the school, such as baseball or softball, which have combined to win four district crowns, second-year coach Greg Rowe is looking for small, step-by-step improvements.

And that’s OK with the Stallions’ runners, jumpers and throwers. After all, they have “Stallion Spotlight,” a third-period daily news show that has publicized some of those accomplishments.

On the student-produced show, team members have personal-best marks read aloud and more attention is paid when a school record is set.

“I got a lot of compliments like, ‘Oh, good job on your new personal record,’ and then I had five people talking to me,” said sophomore Sarah Chandler. “It was good.”

Chandler has made at least three appearances on “Stallion Spotlight.” She broke her own school record from 2008 in the 300-meter dash with a time of 42.07 seconds, while running the anchor leg on two record-setting relay teams.

The 4x200 mark was later tied on Jan. 24 by the team of Tarrant, freshman Simone Ramdeen, Ross and Swogger.

&lt;b&gt;ROWE CAME&lt;/b&gt; from Annandale High School prior to South County’s inception in 2005. He had been the head indoor track and field coach there for four years, but valued the opportunity to start a program from scratch.

The move was a demotion of sorts for Rowe, but he didn’t care. He knew he would have his chance to eventually serve as the program’s head coach. He just didn’t figure that it’d come in his third year.

“I didn’t put a timetable on it,” said Rowe, who started out as the distance coach, a position he occupied for two years at Annandale. “I really didn’t know. I just figured it’d be a while.”

The same could be said about his drive to work. Rowe lives 90 miles away in Woodstock, a small town located in Shenandoah County. The drive takes an hour and 45 minutes each way.

Sixty of South County’s 120 team members are freshmen, which means that while Rowe expects to encounter some growing pains during the next two years, the rise of South County’s indoor track and field program should come sooner rather than later.

“We’ve got some work to do,” Rowe said. “It usually takes about four or five years to really get a program up and on its feet. But I think we’re heading in the right direction and I’m pleased with the progress that the kids have made.”

&lt;b&gt;WHILE CHANDLER&lt;/b&gt; has been a stalwart for the girls team, Mandeville, a senior distance runner, has been equally as impressive on the boys side. According to Rowe, Mandeville ran around a 5:10 mile as a freshman. Now he runs two miles at a faster pace.

Mandeville has also had his share of record-setting segments on “Stallion Spotlight.” As a junior, he shattered the 3,200 school record of 10:31, cutting more than 15 seconds off that time with his mark of 10:14.09.

Then as a senior this winter, Mandeville slipped under 10 minutes, clocking a 9:59.11. Junior Tom Schafer has also broken the original school record and Mandeville’s first record with a time of 10:06.37.

Mandeville said that Rowe has helped him with foot repetitions and turnover, essentially altering his strides so Mandeville’s feet hit the ground more frequently during the course of a race. Mandeville also cited training with the cross-country team for his improved performance.

“Coach Rowe is a great coach,” Mandeville said. “We haven’t had consistent coaching, and now coach Rowe has been able to consistently coach us.”