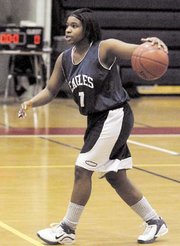 Edison junior Myisha Goodwin, one of the top scoring threats in the area, is averaging 28.1 points and 4.7 assists per game this season. 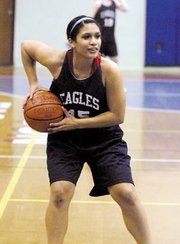 Edison senior Meagan Chesley has embraced her new role as a team leader. ‘You have to set a good example, whether it’s in practice, a game or even just in school,’ she said.

Only a freshman, Brittany Murray has been an important player for the Edison girls basketball team this season, averaging 6.5 points and 6.1 rebounds per contest. 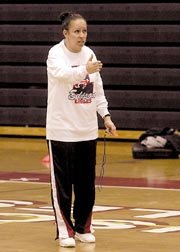 In her eighth season on the Edison bench, girls basketball coach Dianne Lewis has found herself having to teach and coach a little bit more than in past years.

Some things change, while others, such as playing for the Edison girls basketball team and the standards and expectations that come along with that role, stay the same.

In this year’s National District opener on Dec. 13, the Eagles dropped a 61-53 decision at Mount Vernon, snapping the school’s 71-game district winning streak. The loss happened partly because of Mount Vernon’s varsity-level experience but more so thanks to Edison’s lack of it.

“I literally I have one kid who has that varsity experience, and in a big game that counts for a lot,” said Coach Dianne Lewis, in her eighth year at Edison.

Perhaps befitting of a team’s development over the course of a season, Edison rebounded with a 67-59 win over the Majors on Jan. 29. With a 56-46 victory at Yorktown Tuesday night, the Eagles improved to 13-5 overall, 8-1 in National District play.

“The second time we played [Mount Vernon],” Lewis said, “I think our kids had that loss in the back of their heads and it helped to motivate them.”

&lt;b&gt;LEWIS ADMITS&lt;/b&gt; that the team’s talent level has dropped off, although sending players to UCLA (Doreena Campbell) Florida State (Adria Crawford) and Georgetown (Chasity Clayton) is a tough act to follow every season.

But the one thing that has remained constant has been the young players’ desire to become a part of the Edison tradition, which has produced five consecutive district titles along with Northern Region championships and Virginia AAA state runner-up finishes in both 2006 and 2007.

“It’s different with the youth, and that’s not necessarily a bad thing,” Lewis said. “It’s not the same level of talent. We don’t have a slew of Division I players. But the young kids want to learn and they want to do well.”

And Edison has done well. Following a loss to Indian River on Jan. 3, the Eagles have won eight of their next nine games, with every win coming against district competition and the only loss to Freedom-South Riding.

Much has changed since the early loss to Mount Vernon. Younger players have learned more of what’s being asked of them and have adapted to the increased speed of the varsity game.

“It’s been a little tough because they expect more from us, and we have to play up from what we’ve been playing, which is middle school ball and AAU,” Murray said. “For my AAU team, I was a leader. Now I’m just a freshman and not even close to being a leader. It’s kind of hard adapting to that.”

&lt;b&gt;THE ONE CONSTANT&lt;/b&gt; this season has been the outstanding play of Goodwin, a passer-turned-prolific scorer who used to set up Campbell, Crawford and Clayton. Goodwin is averaging 28.1 points, 4.7 assists and 4.9 steals per game this season.

Goodwin has also been able to give the Eagles a boost when Lewis calls for it.

“Some games she starts out a little slow because she’s trying to get other people involved,” Lewis said. “She’s trying to see how the flow of the game goes, and then I just say to her, ‘OK … Myisha, we need you to step up.’ She knows what that means.”

“Sometimes I’m a little too passive,” Goodwin said. “Even though I’m trying to get my players to score and make them better, sometimes she just needs me to take charge and be Myisha.”

Goodwin isn’t the only one that has adapted how she does things around the hallways off of Franconia Road. Meagan Chesley, a senior guard, has embraced her newfound leadership role, even if it wasn’t so natural to her right away.

“It’s definitely a different perspective,” said Chesley, of having such a wealth of freshmen and sophomores. “When I was a sophomore and junior, I didn’t see how important it was to be a role model. You have to set a good example, whether it’s in practice, a game or even just in school.

“Because that’s how the program is going to keep having its name and keep going on and keep winning. That’s what Doreena and all of them did. They set the tone. We’re just following it.”