Wolverines’ McCants wins district title in both 500- and 300-meter dash. 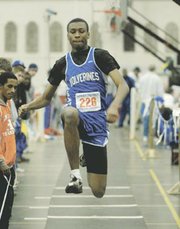 West Potomac senior Jon McCants took home Patriot District titles in the 500- and 300-meter dash. He also finished second in the triple jump and third in the 55-meter dash. West Potomac came in third place in both the boy’s and girl’s competitions.

West Potomac coach Don Beeby had a plan heading into the boy’s portion of last weekend’s Patriot District Indoor Track and Field Championships. To maximize his team’s point total, Beeby decided to put “B” teams in certain relays to allow his best athletes to compete in the most individual events as possible.

State rules say an athlete can only be a part of three running events in one meet, which in the case of the Wolverines, can make picking and choosing a risky scenario.

“When you spread things out in these meets, you take a real chance because if something doesn’t go right, especially since you’re asking two or three athletes to do all the events, and that’s just a lot to ask,” said Beeby.

That meant a lot was put on the shoulders of seniors Jon McCants, Joe Bradley, and Brandon Comfort — all of whom were asked to compete in the maximum number of events allowed.

All three performed admirably, and in some cases spectacularly, but it wasn’t enough to give West Potomac the first-place team finish it desired. The Wolverines came up just short in third place.

McCants provided much of the highlight reels during the two-day event. The senior took home first place in the 500-meter and 300-meter dash, which both went along nicely with his second-place showing in the triple jump and third-place finish in the 55-meter dash.

Bradley and Comfort also finished second and fourth, respectively, in the 500-meter race. Bradley was also a part of the Wolverines’ second-place 4x800-meter relay team.

THE GIRL’S SIDE of the meet served as a venue to showcase the depth of the West Potomac squad. Although the Wolverines had no first-place finishes, there were plenty of quality performances to go around. The West Potomac girls finished in third place overall.

The pole vaulters stole the show early on in the competition with seniors Meghan Connor and Kaitlyn Anderson both completing jumps of more than nine feet to finish second and third, respectively.

Bigler got second in the test of endurance that is the 3200-meter run.

Although the final result wasn’t what Beeby planned, the strong individual performances have the coach excited for the Northern Region Championships, which are scheduled to take place on Feb. 21 at George Mason.

“I think we’re a top two team in the region,” said Beeby. “We actually line up better at the regional meet than we do at the district meet because some of these big points that we have are going to stand up at bigger meets.”