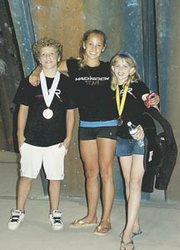 Sasha Diguilian (middle) and Tegan Wilson of Alexandria both did well at a recent national rock climbing competition. 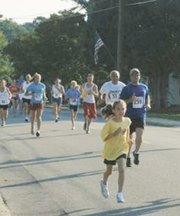 Introduced by over the top competitive eating emcee George Shea as “the Leader of the Four Horsemen of the Esophogus” two weeks ago, the 98-pound Thomas is the No. 5 ranked competitive eater in the nation with 29 world titles and records in more than 25 different competitions. She’s nicknamed “The Black Widow” because of her ability to out eat men three and four times her size.

Thomas did not return a phone call seeking comment on her accomplishments, but here’s a sampling of just some of her achievements within the world of competitive eating over the years.

* 11 pounds of cheesecake in nine minutes

Sasha Diguilian of Alexandria placed second in sport climbing in her age category at the national competition. Diguilian has accumulated numerous climbing awards including three-time North American Continental Champion in her age group and placing fourth at the Junior World Championship in 2008. By placing second, Diguilian earns a spot on the U.S. National Climbing Team.

Audrey Androus, 9, of Alexandria won the 12-and-under division of the 7th annual Reedville, Va. Firecracker 5k race on July 4. Androus’s winning time of 24 minutes, 33 seconds placed her in the top 15 percent of all women and top 20 percent of all runners. Nearly 500 people entered the race. Androus became the youngest runner to ever win the 12-and-under division. She is a rising 4th grader at Charles Barrett Elementary School and a member of the Alexandria United U10 Girls travel soccer team.

The Mount Vernon Park Gators collected their second-consecutive victory over a team with a Dolphin mascot, this time defeating Greenbriar, 219-183. With the exception of breaststroke, the meet was close the entire way — but the third stroke of the meet allowed the Gators to break away for the easy victory and improve to 3-1 on the nearly completed season. Double Gator winners were Collin Sundsted (free and back), Torie Bolger (free and back), Sara Bertram (free and fly — 13 year old Bertram won swimming up as a 15-18 yr old), Christine Rholl (free and back), Jack Benson (back and fly), and Maddy Bolger (back and fly).

It was another sunny Saturday morning as the Riverside Gardens Tsunami swim team won its fourth meet of the season on July 11. The Riverside team defeated the Commonwealth Cudas by a score of 232-170 for another home win. The team is now 4 – 0 for the season, with one meet remaining. Riverside Gardens posted 22 first-place finishes in 38 events.

&lt;i&gt;To have swim results posted in print or on the Connection's website, please contact sports editor Mark Giannotto at mgiannotto@connectionnewspapers.com.&lt;/i&gt;