Ride to Top on Classic Rock 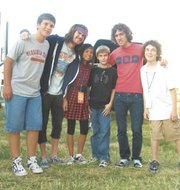 "Are those kids in the band?" a man in the crowd whispered. While the band on stage finished setting up, the curious audience at Jaxx Night Club in Springfield on Friday, July 17 grabbed their drinks and headed down to the floor to get a closer look.

The band named The Fuzed was a noticeable deviation from Jaxx’s typical lineup and seemed to mimic a scene from the movie "School of Rock." The Fuzed members include guitarist and lead vocalist Cheska Zaide of Ashburn who is 12, lead guitarist Trevor Fichtner of Haymarket and drummer Jake Rosenthal of Oak Hill who are both 13. Bassist Connor Ginger of Gainesville is the senior member of the group at age 14. Though many "tween" bands like Hannah Montana and the Jonas Brothers have gained notoriety with pop-rock melodies and catchy lyrics, The Fuzed’s set list reflected more mature musical tastes.

TWO of the band’s biggest hits at Jaxx were Ozzy Osbourne’s "Crazy Train" and "Sweet Child of Mine" by Guns ’n Roses. This hit caught the attention of headlining group Forever the Sickest Kids (FTSK) while The Fuzed was playing at Loudoun’s YouthFest in June. FTSK unexpectedly asked The Fuzed to open for them later that evening.

"They are very noticeable because they are very young" she said. "So when people saw them they were like, ‘Whoa. We were surprised. We were like, cute kids-oh they’re going to play cute silly songs. But no, they can rock.’ They always manage to surprise people."

Band members cited such musical influences as Aerosmith, The Beatles, KISS and AC/DC. Besides covers, The Fuzed also has two original songs and they are working on more.

The young musicians met and formed the band after Zaide and Fichtner met through Bach to Rock, a music school catering to kids interested in performing. Later they recruited Ginger and Rosenthal.

"If you want to know if we know all their songs, the answer is yes. We’ve heard them all a billion times" said John Fichtner.

"We ask them, ‘Do you guys want to take the day off today?’ and they’re like, ‘Nope’" said Andrea Rosenthal, Jake’s mother. "If they’re earning some high school money making music rather than bagging groceries and it becomes their high school job, it’s good, as long as they enjoy it."

Members of The Fuzed, though, said they are aiming a little higher.

"We want to go to the top," said Ginger. Other future goals include "World touring like AC/DC. Like Australia to Ireland to the U.S.A. and everything," said Trevor Fichtner.

Before world tours, though, The Fuzed will continue to play in and around Northern Virginia at events like the upcoming Loudoun County Fair on Friday, July 31 and at the Montgomery County Fair in August.