Video Added to the Bard
Votes

Video Added to the Bard 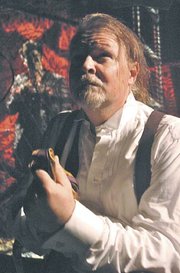 It is always a pleasure to find a theater company that stretches its reach, giving artists challenges and, at the same time, audiences a fresh look at some familiar works. With a new view of Shakespeare’s "Hamlet," Arlington-based Firebelly Productions continues to meet its mission of giving young performers and designers meaty material on which to cut their teeth, but the results don’t give audiences a lot of new insight into a classic work.

Did they reach a bit too far? No. Not really. They manage to provide a clear and consistently watchable presentation of a complex and convoluted story, but they don’t add a lot to one of the theater’s most oft-produced dramas.

"Hamlet" has been something of a staple for quite a few centuries now. First penned at the start of the 17th century (or perhaps even the end of the 16th) the story of the prince of Denmark who feigns madness in order to unmask his father’s killer has been on local stages multiple times in recent seasons, many with satisfying productions and some with stunning ones.

Firebelly’s is more a middling one. Lead actor John Bonner of Chantilly makes an easy-to-follow young Hamlet driven by a thirst for revenge when his uncle Claudius murders his father the King and marries his mother, Queen Gertrude. The King may be dead before the play begins, but Matthew Friedman stalks the ramparts as his ghost before re-appearing in the role of one of Hamlet’s famous friends as one half of the pair of Guildenstern and Rosencrantz.

The 400-year-old text often falls on modern ears as a bit of heavy going but the cast here does its job of first understanding the meaning of the measured verse and then communicating that meaning to modern audiences. Best at this in this cast are Steven J. Hoochuck, as the felonious uncle Claudius; Charles St. Charles, as Polonius, a court advisor who goes with the flow; and Charley Mann, as his son Laertes, who seeks his own revenge when Hamlet mistakenly stabs his father thinking it is the king hiding behind a curtain.

The play only provides two roles for women but they are certainly solid roles. Sonia Justl delivers a high-octane mad scene as Hamlet’s girlfriend, Ophelia, while Shelby Sours hits a few nice highly emotional notes as the Queen.

The production is under the direction of Michael Ryan Fernandez, who is currently working on his masters at the Film School at DePaul University after graduating from George Mason’s Theatre Department. His interest in film and video technology is clear in this production as he uses a screen at the back of the stage to display live images of many of the scenes from video cameras both hand held and mounted on the set. These images don’t often add a great deal to the proceedings and often distract when attention should be focused on the action. However, the pre-taped (or filmed) scene of Ophelia’s off-stage death by drowning is both effective and particularly memorable.

Since video technology is visible during the production, it seems proper that this is a modern-dress mounting of the venerable classic, using street-style clothing for many of the men, but putting the queen in some outfits that look a bit like out-of-date prom dresses. Stephen Frost provides an almost cinematic musical score that, in keeping with Fernandez’s approach, sounds at times like the soundtrack of a Hollywood movie.

No production of "Hamlet" can truly work without close attention being paid to the combat skills of the troupe. Here, in the small black box Theatre on the Run where no seat is more than four rows from the stage, it is even more important. Firebelly was fortunate to obtain the services of Andrew Pecoraro as "fight coordinator," who makes sure that the final scene in which Bonner, as Hamlet, and Mann, as Laertes, go at it with poisoned swords and daggers.