Chasing Down the Champs
Votes

Chasing Down the Champs 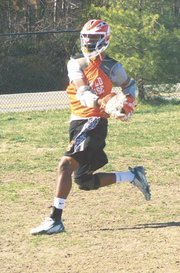 Senior midfielder Michael Ande is one of the Hayfield boys’ lacrosse team’s top returners. He and sophomore Christian Davis ranked in the team’s top four in scoring a year ago.

After starting out as an attackman, junior Phillip Hartman switched to goalkeeper last season. 'We didn’t have a goalie, so I figured I’d try it. It looked kind of cool,' Hartman said.

Jack Kendall, the fifth-year coach of Hayfield’s boys’ lacrosse team, follows a simple philosophy. Paraphrased, it states that until someone knocks off the defending champs, they're still the champs.

Such is the case in the Patriot District this season, with a glut of teams, including those from West Springfield, Lake Braddock, Lee and Hayfield, all looking to strip Annandale of both the boys’ and girls’ lacrosse titles.

“Over the past couple years, it’s been really competitive,” said Hayfield junior Phillip Hartman, the team’s goalkeeper. “Everyone is kind of looking to see who’s going to step up and take the challenge.”

While the Virginia AAA state championship game has yet to feature a team that’s not from the Concorde District, with both boys’ and girls’ teams from Chantilly, Robinson, Westfield and Oakton all taking a shot, the competition among Patriot District teams may be just as intense, if not as successful on a statewide scale.

&lt;b&gt;AT HAYFIELD,&lt;/b&gt; Kendall, like many coaches, has taken the youth-leagues-are-the-program’s-future-stars-approach. But unlike most coaches, he’s done it himself.

When Hayfield went 14-1 in 2007, Kendall, because of the fact that his son was on the team, had coached most of those players since they were in seventh grade. So this year, Kendall is coaching a 13-U team with the Springfield Athletic Association’s youth lacrosse program.

But while the youth-league work may not pay off for a few years, this year’s team, Kendall feels, could challenge Annandale and West Springfield because of its workmanlike attitude.

“I really like that I don’t have any superstars,” said Kendall, praising the work of senior Michael Ande and sophomore Christian Davis, two of his team’s top four scorers from last season. “I have a lot of kids who understand the team concept.”

The Hayfield girls’ team is 2-2 thus far, enjoying wins over Stuart and Edison. With the losses of All-District performers Erin Stevenson, Tancy Weatherford, Raya Thomas and Caitlin Vongvirath, sophomore goalkeeper Erika Dommes, an honorable mention All-District pick, will be counted upon to lead a young team.

On the girls’ side, Jennifer Diana takes over another Lee team that struggled to win a district game last spring. Diana will look to senior midfielder Casey Bragg to try and change that this season.